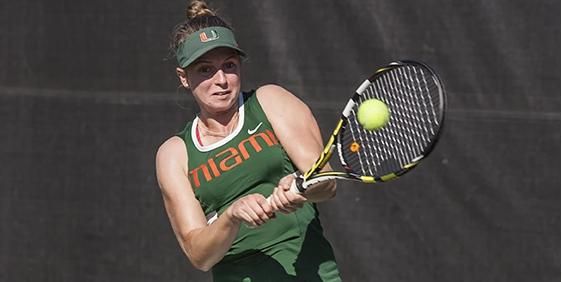 The Hurricanes opened the day by going 2-2 in doubles action and then proceeded to post a 7-2 mark in singles competition as they faced off against Utah and No. 11 Vanderbilt.

“I was really happy with the girls’ performances today,” Miami head coach Paige Yaroshuk-Tews said. “I think that everybody down the line did a great job. We knew that we needed come out and set a positive tone today against Vanderbilt because they are a team that we could realistically see in the NCAA Tournament, so it was important for us to go out and have a great showing.”

No. 15 Monique Albuquerque and Clementina Riobueno gave the Hurricanes their first victory of the day as they defeated Utah’s pair of Sarah Richter/Luisa Gerstner Da Ro by a 7-5 count. However, the Utah’s duo of Tereza Bekerova and Margo Pletcher defeated Miami’s eighth-ranked duo of Stephanie Wagner and Lina Lilekite by a 7-5 count.

In the singles competition, the Hurricanes posted seven victories. No. 39 Sinead Lohan led the way with a convincing 6-0, 6-2 decision over Vanderbilt’s Frances Altick. No. 88 Riobueno also posted a victory as she went 6-3, 6-3 over Vanderbilt’s Courtney Colton.

Seventh-ranked Wagner dropped a thrilling three-set matchup against No. 15 Sydney Campbell from Vanderbilt.

“These are the teams that we need to be playing if we want to get better,” Yaroshuk-Tews said. “If we are trying to a line ourselves to be going deep in the tournament, we need to be playing these schools early in the season with a week of practice under our belt. There was some pretty amazing tennis for three days and that’s what we needed.”

Miami returns to action Jan. 24-25 as it takes part in the 2015 ITA National Indoor Kickoff Weekend at home.