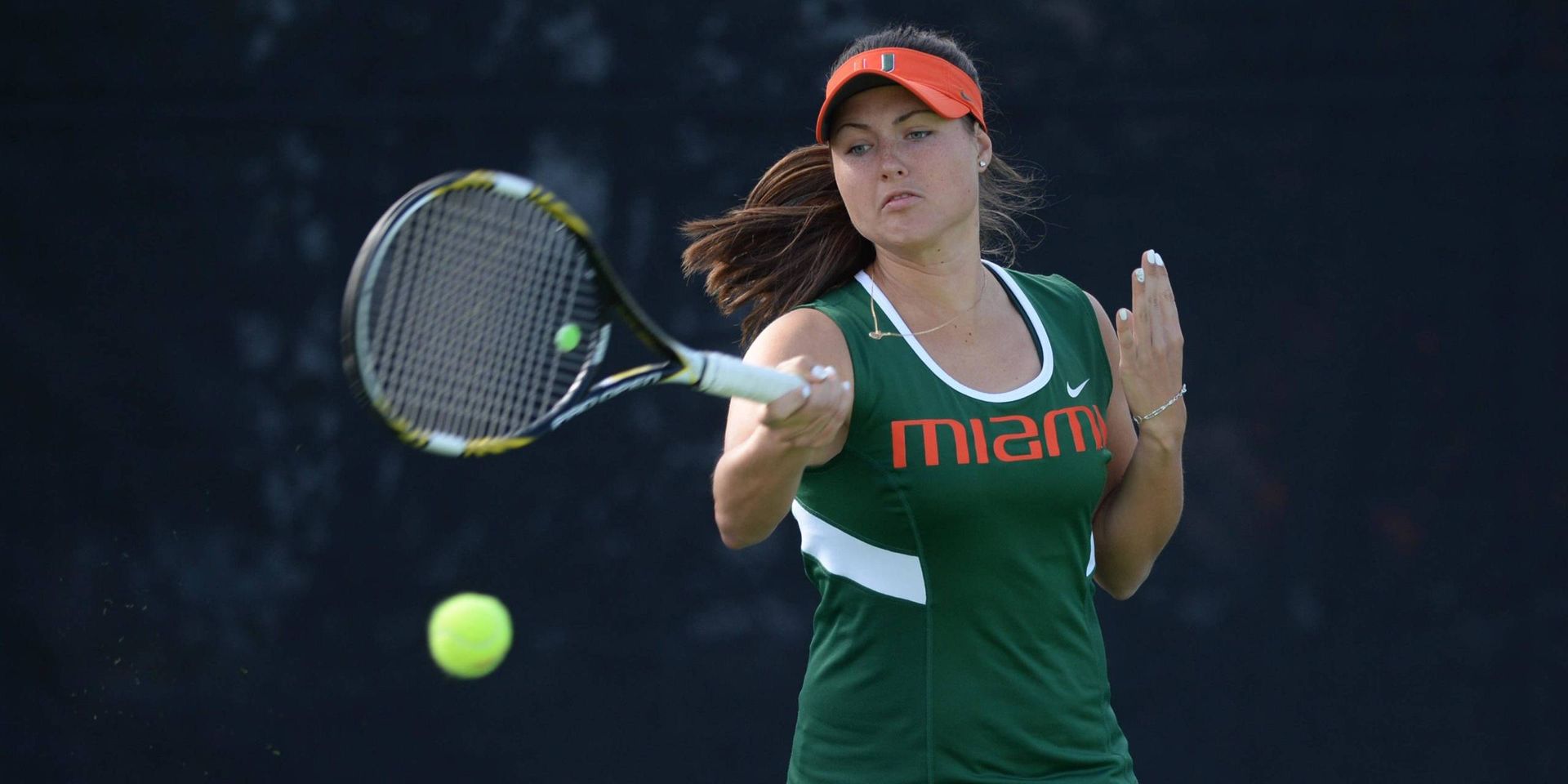 CORAL GABLES, Fla. – It was nearly a clean sweep for the University of Miami women’s tennis team on Friday during day one of the Miami Spring Invite at the Neil Schiff Center. Nine Hurricanes combined to compete in 13 matches, ending the day with eight singles victories and three doubles victories.

“Had a good showing today in singles and doubles,” Miami head coach Paige Yaroshuk-Tews said. “New format will take some time to adapt to. Overall I think we had a productive start. I’m happy to see our entire team healthy and competing.”

Miami opened play Friday morning with three doubles matches against No. 22 Texas and one against a pair from No. 44.

The eighth-ranked team of junior Stephanie Wagner and senior Lina Lileikite eased their way to victory against the duo of Breaunna Addison and Ryann Foster from Texas, 6-3. The freshman tandem of Sinead Lohan and Wendy Zhang, ranked No. 37 in the nation, controlled their matched against Texas’ Neda Koprcina and Lana Groenvynck in a 6-3 victory.

Silvia Fuentes and Yolimar Ogando teamed up and defeated the duo of Victoria Robertson and Alexia Petrovic from Utah, 6-3. The No. 15 team of Monique Albuquerque and Clementina Riobueno faced Pippa Horn and Danielle Wagland from Texas and fell 6-2.

In the singles competition, Miami squared off against No. 44 Utah and was nearly flawless over the nine matches.

Seventh-ranked Stephanie Wagner faced No. 100 Tereza Bekerova from Utah. Wagner was put to the test in the first set, falling behind 4-3, but then took control of the match the rest of the way and won nine of the final 10 games for a 6-4, 6-1 victory.

Lina Lileikite, ranked No. 94, faced Sarah Richter and dominated her way to another straight set win, 6-2, 6-1.Sinead Lohan impressed in the first spring match of her career, showing why she is ranked No. 39 in a 6-1, 6-1 victory over Jena Chang.

No. 58 Wendy Zhang faced Alexia Petrovic from Utah and continued the winning ways for the Hurricanes, coming away victorious in straight sets, 6-3, 6-2. Clementina Riobueno, ranked No. 88, controlled her match from the very beginning, winning in straight sets against Luisa Gerstner Da Ro, 6-2, 6-3. Monqiue Albuquerque quickly shut down Lucia Kovarcikova in a straight set victory, 6-0, 6-3

Yolimar Ogando won the first singles match of collegiate career in a tough battle against Elena Najera-Salas. Ogando narrowly won the first set and then controlled the second for a 7-6, 6-3 victory. Silvia Fuentes, also picked up a victory in straight sets, taking down Margo Pletcher, 6-2, 6-3.

Judith Bohnenkamp put forth a tremendous effort for the Hurricanes, but the freshman fell just short in her singles match, 6-4, 1-6, 8-10. Bohnenkamp drew great support from the crowd as she won five straight points in the tiebreaker after initially falling behind 9-3.

The Hurricanes will begin play Saturday at 9:00 a.m. against No. 11 Vanderbilt in doubles action and then will take on No. 22 Texas in singles play.

“I want to get off to a more explosive start in doubles play tomorrow,” Yaroshuk-Tews said.

All of Miami’s matches Saturday are set to take place on courts one through four.