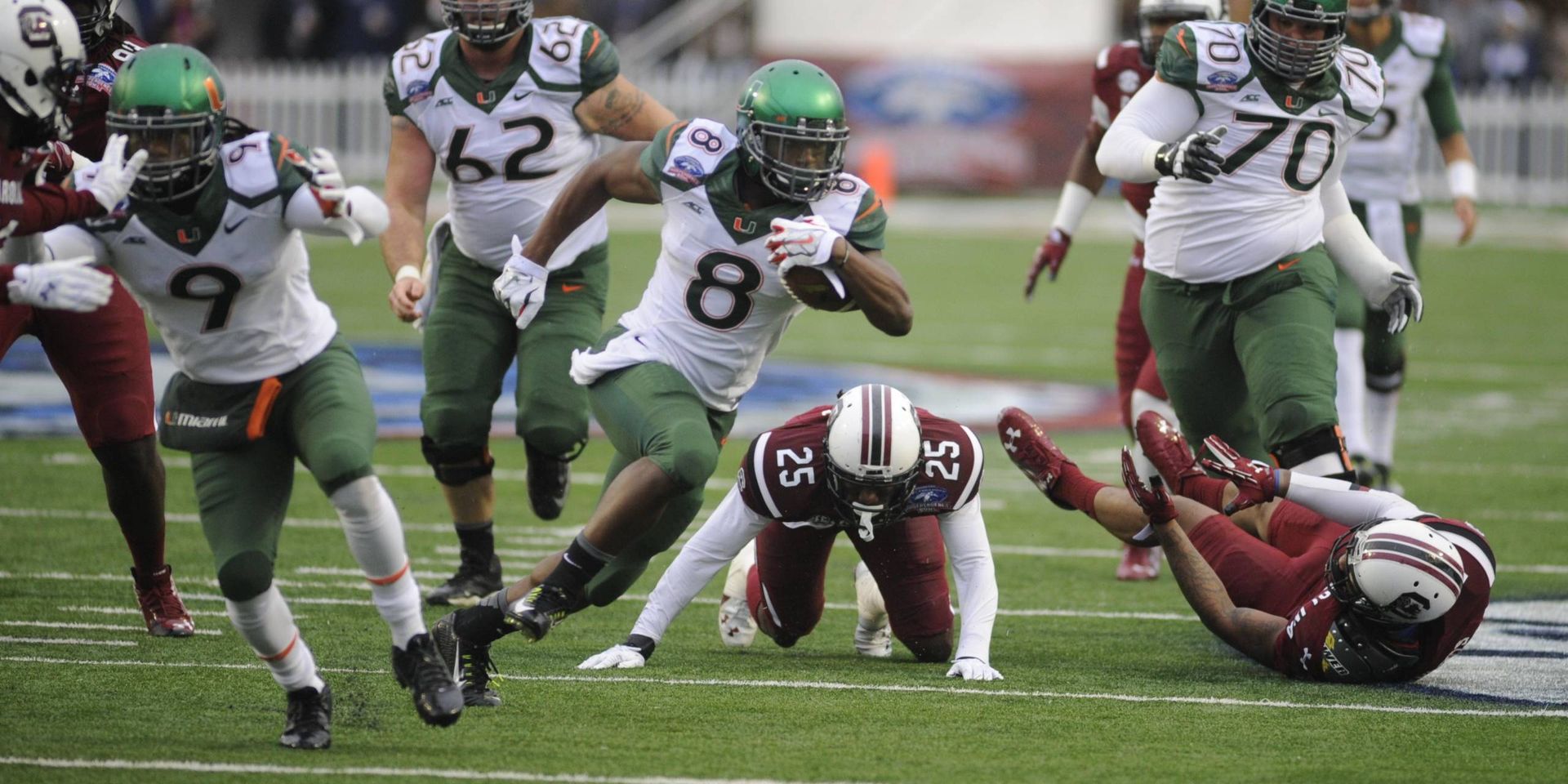 SHREVEPORT, La. (AP) – Duke Johnson rushed for 132 yards and added another 51 yards on 5 receptions but Miami fell to South Carolina, 24-21, in the Duck Commander Independence Bowl.

Dylan Thompson threw for 294 yards and two touchdowns and ran for another score for South Carolina.

Pharoh Cooper was Thompson’s favorite target, catching nine passes for 170 yards, including a spectacular 25-yard grab on the decisive drive late in the fourth quarter.

Miami’s Brad Kaaya threw for 236 yards, one touchdown and one interception.

Johnson also appeared to suffer a right leg injury late in the fourth quarter and didn’t return to the game, though he was up and walking on the sideline in the final minutes.

Two plays later, Thompson hit Cooper on a spectacular pass and catch to get down to the Miami 2. Thompson fit the ball into a tight window and Cooper helped him by leaping over the defender to make the grab.

Thompson trotted into the end zone untouched on the next play and the Gamecocks had what proved to be an insurmountable 24-14 lead with 4:13 left.

Miami was in control early, but its long drives were stuffed in the red zone. Michael Badgley made field goals from 27 and 26 yards to give the Hurricanes a 6-0 lead by early in the second quarter.

South Carolina, meanwhile, struggled to get anything going until midway through the second quarter, when Thompson connected on a long throw over the middle to Cooper, who ran the rest of the way for a stunning 78-yard touchdown score.

Just like that, the Gamecocks looked comfortable. Thompson scrambled out of the pocket a few minutes later on a broken play before finding Mike Davis on a 15-yard touchdown pass. Elliott Fry made a 32-yard field goal with 1:39 left as South Carolina scored 17 straight points to take a 17-6 lead into halftime.

The Gamecocks’ defense – maligned for much of the season – didn’t give up a touchdown until late in the third quarter when Gus Edwards’ 3-yard touchdown run and the Miami’s ensuing 2-point conversion pulled the Hurricanes to 17-14.