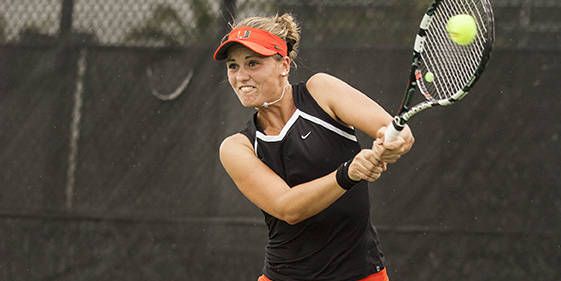 ORLANDO, Fla. – Four members of the University of Miami women’s tennis team advanced to finals of their respective draws on Saturday at the USTA Clay Court Invitational. Half of the Hurricanes who played in the tournament will now be competing for a championship on Sunday morning.

“These ladies have done a good job in figuring things out under tough conditions,” head coach Paige Yaroshuk-Tews said. “Today was a rough day to play tennis. The windy and cold conditions were not advantageous for our players, yet we hung in there, stayed calm and found a way.”

In the A Draw, No. 1 seed Stephanie Wagner, ranked No. 18, put forth an impressive showing against the No. 5 seed, Tristen Dewar of Clemson. The junior from Amberg, Germany won 6-2, 6-2 over the No. 95 player in the nation to make the final.

No. 71 Lina Lileikite, the No. 2 seed in the A Draw, nearly forced an all Miami finale, but narrowly lost a hard fought match to Clemson’s Joana Eidukonyte. The senior won the first set and nearly took the second, but came up just short, falling 4-6, 7-5, 6-3.

Wagner will take on Eidukonyte Sunday at 9:00 a.m. in the A Draw final. The match will be broadcast live on ESPN3.com and the WatchESPN app.

While an all Hurricane final was denied in the A Draw, Miami freshmen Wendy Zhang and Sinead Lohan will play each other in the B Draw championship. Both defeated players from Florida State in Saturday’s semifinals to advance.

Zhang and Lohan will face one another in the B Draw final Sunday at 9:00 a.m.

Miami will also have a C Draw finalist, as No. 1 seed Silvia Fuentes won her semifinal match 6-0, 6-3 over No. 3-4 seed Eveline Lepinay of Stetson. The freshman will play Virginia Tech’s Katherine Butler in the championship match Sunday at 9:00 a.m.

With four Hurricanes set to play Sunday, Yaroshuk-Tews wants to see them continue the way they played in their semifinal matches.

“We are looking for the same composure, as we hope to take three titles back to Miami,” Yaroshuk-Tews said.