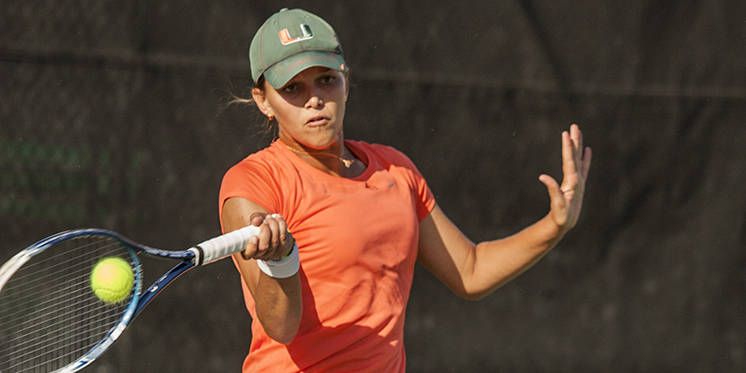 CARY, N.C. – The Miami Hurricanes women’s tennis team posted a total of six wins in its fall debut at the Duke Fab Four Invite on Friday.

“The ladies competed hard today,” head coach Paige Yaroshuk-Tews said. “We played a lot of tennis with more to come tomorrow. Our newcomers were poised and mature out there. I’m looking forward to another day of fun tennis from everyone.”

Friday got going with two rounds of doubles, where the Canes posted three wins in all. Third-ranked Monique Albuquerque and Clementina Riobueno picked up right where they left off last spring, posting an 8-2 win against Alabama’s Natalia Maynetto and Danielle Spielmann. Just hours later, the Canes rolled past Virginia’s Cassie Mercer and Skylar Mortan 8-3. Albuquerque and Riobueno will play in the white doubles final tomorrow against Mississippi’s Natalie Suk and Zalina Khairudinova.

Sinead Lohan and Stephanie Wagner picked up their first win as a doubles pair with an 8-0 victory against North Carolina’s Cassandra Vazquez and Marika Akkerman. Later on in the afternoon, the pair fell to Alabama’s Maya Jansen and Erin Routliffe 8-7 in the semifinal match of the blue doubles flight. In a third place match tomorrow, Wagner and Lohan will face off against Duke’s Ester Goldfield and Samantha Harris.

Freshmen Silvia Fuentes and Wendy Zhang dropped their opening match to Florida’s Kourtney Keegan and Josie Kuhlman by a score of 8-2. The pair of newcomers then fell to North Carolina’s Hayley Carter and Maggie Kane by a score of 8-5.

Miami had equally as much success in singles as they did on the doubles courts, posting three more wins in the late afternoon. No. 18 Wagner got off to a strong start with a 6-3, 6-4 win against Duke’s Rebecca Smaller. The season-opening win for the Amberg, Germany native sets up a quarterfinal match tomorrow against Florida’s Peggy Porter.

In Riobueno’s opening match, she defeated North Carolina’s Maggie Lane in straight sets 6-2, 6-1. With the win, Riobueno advances to the quarterfinals tomorrow against Virginia’s Stephanie Nauta. Posting the third singles win for the Canes was true freshman Sinead Lohan, who rolled past North Carolina’s Vazquez in dominant fashion 6-0, 6-0. She advances to the quarterfinal tomorrow against Oklahoma State’s Viktoriya Lushkova.

Fuentes opened up her Miami singles career with a 6-2, 7-6(4) loss to Florida’s Stefani Stojic. The freshman will continue play tomorrow against Alabama’s Maya Jansen. Oklahoma State’s Kelsey Laurente defeated Miami freshman Zhang in a three-setter, 4-6, 7-5, 6-2. Zhang will look to bounce back tomorrow against Furman’s Karlee Bryde in the consolation quarterfinal. Senior Albuquerque went ahead in her match against Katarina Adamovic 7-6 but fell in the second and third frames 6-1 and 6-4. Albuquerque will play Suk from Ole Miss in the consolation quarterfinal on Saturday.

“Some players lit it up over the summer and others are going to have to work their way back,” Yaroshuk-Tews said. “Either way, our heads were definitely in the right place.”