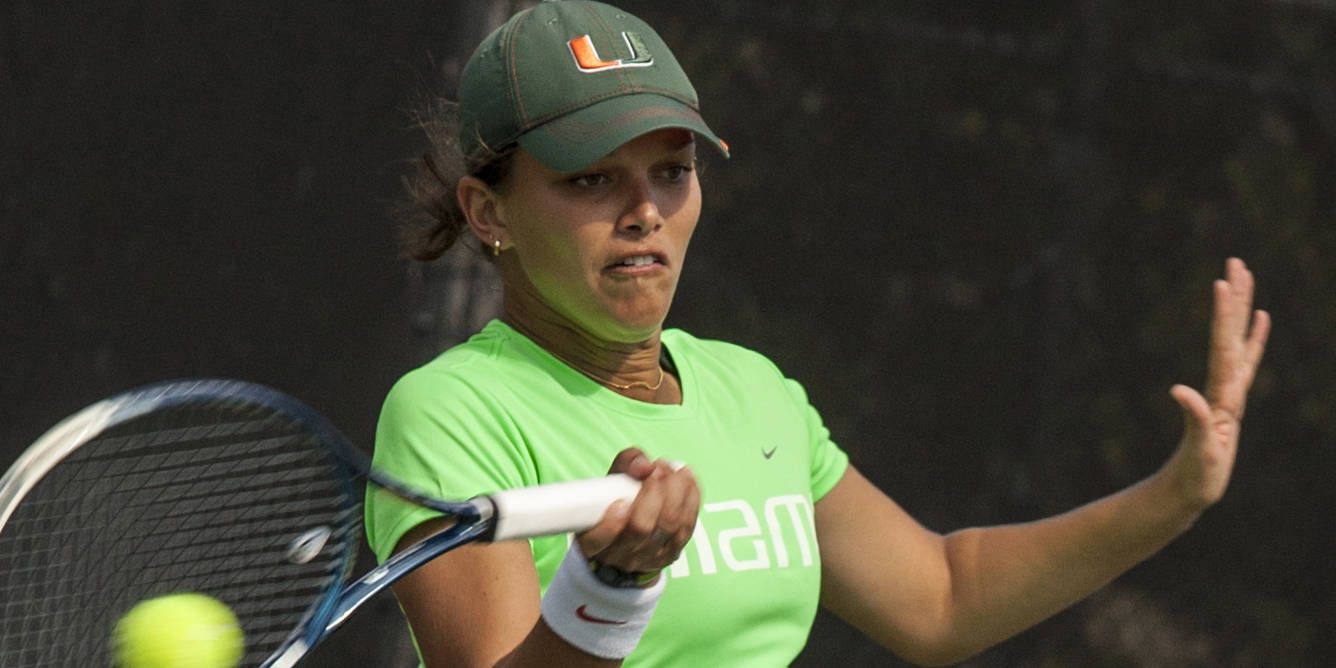 “When the margin is as large as it was today between us and UVA, it’s tough to be too emotional,” head coach Paige Yaroshuk-Tews said.  “Of course I’m upset with the outcome, but I’m more upset with the way we approached this tournament.  Collectively, we didn’t play great all weekend, and we got what we deserved.”

Miami (19-5) fell behind early in all three doubles matches and weren’t able to recover, dropping No. 2 and No. 3 doubles to give the Cavaliers a 1-0 lead.

After winning the opening game at three doubles, Stephanie Wagner and Lina Lileikite dropped the next three in a row. With Miami facing a 6-3 deficit, Virginia earned their first doubles win of the afternoon by putting away the Canes by an 8-4 margin.

The Cavaliers flipped their one and two doubles team from last week’s regular season finale, when the Hurricanes won the doubles point. Playing at two doubles against No. 46 Melissa Bolivar and Kelsey Laurente was 13th-ranked Rachel Pierson and Julia Elbaba. Tied 1-1 early on, the Canes then took a 3-2 lead, but Virginia quickly battled back to regain the advantage. Down 6-4, Miami came back to get within one and make it 7-6, but Virginia won the next game to clinch the point.

In the top doubles match, 11th-ranked Clementina Riobueno and Monique Albuquerque trailed Li Xi and Stephanie Nauta 6-3 when their match was stopped. After taking the lead 2-1 early on, Virginia’s duo won five of the next six to lead 6-3.

The lack of momentum carried over into singles, as Miami dropped five of the six opening sets. Albuquerque opened up with a 6-4 set win against Caryssa Peretz and led 3-0 in the second when the match was ended early.

At two singles, No. 61 Laurente had a rough opening set against 36th-ranked Danielle Collins, falling 6-0. Laurente battled to win two games in the second set, but Collins cruised to a 6-2 set win to give Virginia its first singles point and a 2-0 lead.

Against 69th-ranked Pierson at four singles, Riobueno battled early on in the first set before eventually falling 6-3. Riobueno couldn’t recover from her opening set loss and fell 6-0 in the second, signaling a 3-0 lead for the Cavaliers.

Coming into the match with wins in seven of her last nine matches, No. 90 Lileikite was defeated in straight sets 6-1, 6-1 by No. 61 Stephanie Nauta, giving Virginia the 4-0 match win.

When the match ended, No. 30 Wagner and Bolivar were fighting in their second sets. Against fourth-ranked Elbaba, whom she defeated six days ago, Wagner was down 3-2 in the second after falling in the opening set 6-2. At five singles, Bolivar was trailing Maci Epstein by a set and down 5-2 in the second.

With the regular season and ACC Championship in the books, the Hurricanes now await their NCAA Regional draw, which will be announced next week.