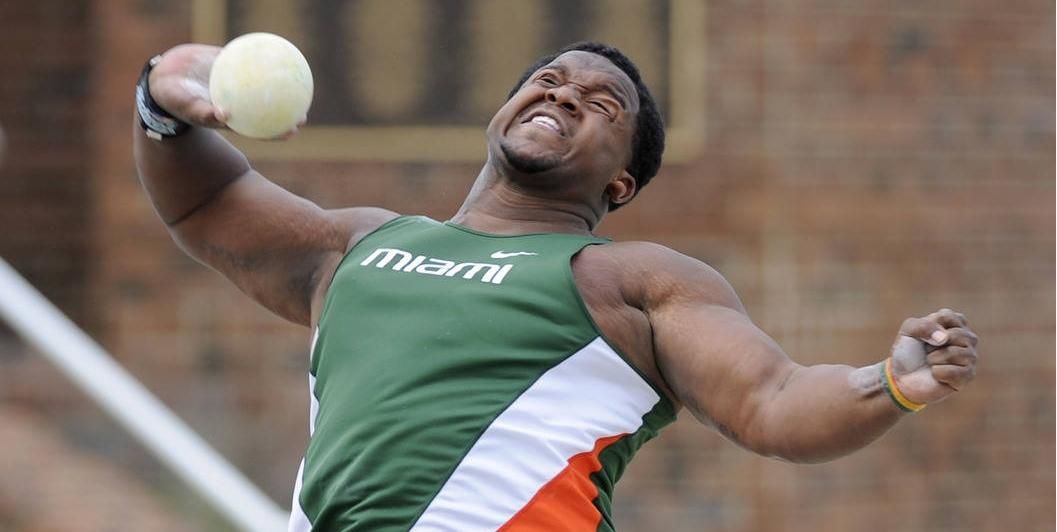 CORAL GABLES, Fla. – The University of Miami track and field program has always been known for its success in the sprints, but the Hurricane throwers are not to be overlooked.

“He is such a leader on our men’s team,” Miami director of track and field/cross country Amy Deem said. “He steps up when it counts and pulls out the clutch throw.”

“Coming in, I was probably the most nervous that I have been competing in my two years here,” Simmons said. “After warm-ups, I started feeling a little better and I had my first throw and I felt pretty confident. Then with the second throw I got that big one. I just want to keep progressing with my throws and getting it out further.”

Simmons also placed second in men’s discus with a mark of 54.53m to finish the weekend with 18 of the men’s 44 points.

Lea Johnson got things started for Miami when she won the women’s hammer throw on Day 1 of the three-day meet. The junior posted a personal-best throw of 61.37m that ranks second in Miami history and eighth in the NCAA East Region.

“I challenged her in the team meeting to set the tone for the women’s team,” Deem said. “She did a tremendous job to throw a personal-best and win an ACC championship.”

“Getting ACC champion indoor was kind of a surprise, but outdoor was always the goal,” Johnson said. “Getting ACC champion for the weight throw and the hammer is amazing. I work really hard and try to set a personal-best in every meet and I have so far this outdoor season. Now it’s about getting that record and being an All- American in hammer throw.”

Fellow thrower Amber Monroe also had a good weekend in Chapel Hill, scoring 11 points for Miami’s women. The junior’s personal-best throw of 16.14m placed her second in the women’s shot put. The mark ranks third in school history and 12th in the NCAA East region. Monroe also scored in the women’s discus, placing sixth with a throw of 46.01m.

Freshman throwers Carlos Mangum and Gian Piero Ragonesi also shined for Miami, combining to score seven points. Mangum snagged five points with a fourth-place finish in the men’s hammer, while Ragonesi added a pair of points with eighth-place finishes in both the men’s shot put and discus.

Miami’s throwers earned four spots on the 2014 All-ACC Outdoor Team. Simmons was named All-ACC in both the shot put and discus, while Johnson and Monroe picked up all-conference honors in the hammer and shot put, respectively.

Look for Miami’s throwers to continue to climb the national qualifying lists as they look to represent the Hurricanes at the NCAA East Preliminary from May 29-31.