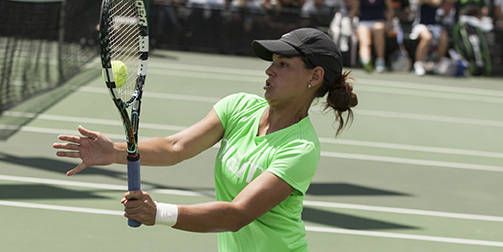 CARY, N.C. – The 15th-ranked Miami Hurricanes women’s tennis team will face No. 27 Notre Dame at 11:30 a.m. tomorrow in the quarterfinals of the ACC Women’s Tennis Championship.

Miami (18-4, 12-2 ACC) received a double bye after earning a share of the ACC regular season championship and a No. 2-seed for the tournament.

Notre Dame, the No. 7-seed, blew past Boston College 4-0 in the second round on Thursday for their first ACC Championship win in program history.

The Hurricanes and Irish met on Feb. 23 in Coral Gables, where Miami came away with a 6-1 win. Notre Dame finished the regular season with a 15-8 overall record and 8-6 in ACC play. Notre Dame has one player currently ranked in the ITA singles poll, Quinn Gleason, at No. 36. The Irish’ top doubles team of Gleason and Britney Sanders is currently ranked 15th.

The Canes, who won the 2013 ACC Championship as the No. 4-seed, will look to defend their title this week. Miami finished the regular season with four straight wins including a senior day victory against No. 7 Virginia.

Recently named to the All-ACC First Team, No. 30 Stephanie Wagner leads Miami with 19-4 overall record and 12-2 record in ACC play.

First serve between Miami and Notre Dame on Friday will be at 11:30 a.m. Live stats for the match are available HERE. For more information on the women’s tennis program, follow @HurricaneTennis on Twitter and Instagram.