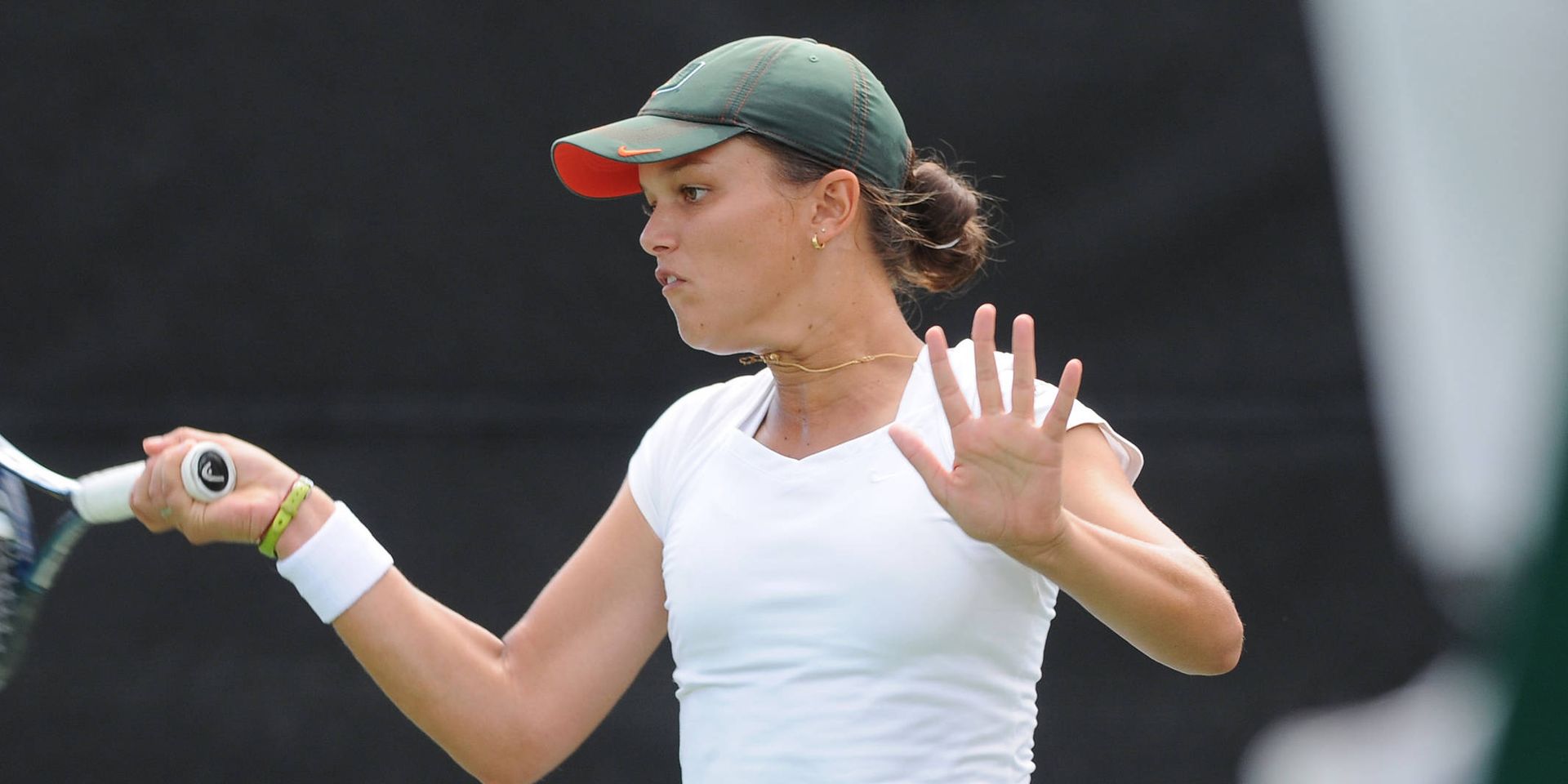 Miami (14-4, 8-2 ACC) got the start it hoped for, but wasn’t able to close out some tight matches and dropped the doubles point to the Blue Devils.

“We played great doubles today but unfortunately came up a bit short,” head coach Paige Yaroshuk-Tews said.  “I’m really happy with the girls and how they played. I thought they raised their level of intensity today.”

After opening up with leads in all three of the doubles matches, each match took its ups and downs.  At two doubles, 28th-ranked Melissa Bolivar and Kelsey Laurente were knotted in a 2-2 tie with 24th-ranked Ester Goldfield and Alyssa Smith before the Duke pair took a two-game lead 4-2. Then, Miami took its turn to make a run, winning four out of the next five games to take a 6-5 lead. After Duke tied it 6-6, the Canes briefly had a chance to put the match away when it held a 7-6 lead, but the Blue Devils forced a tiebreaker and would eventually win it 7-2.

At three doubles, Miami’s Lina Lileikite and Stephanie Wagner led for most of the first half of the set, holding 2-0 and 4-2 leads. Duke did make a run, tying the match 5-5 and eventually taking a 7-6 lead. The momentum of Duke’s Annie Mulholland and Chalena Scholl was too much for the Canes to contain and the Blue Devils won the next game to take the match by a score of 8-6, signaling the doubles point for Duke.

At one doubles, 23rd-ranked Monique Albuquerque were well on their way to an impressive win against 5th-ranked Beatrice Capra and Hanna Mar when their match was cut short. The Hurricanes led for most of the match, holding 3-1, 4-2 and 6-4 leads, but couldn’t finish off the Blue Devils before the other matches were decided. The match ended with the Canes holding a 7-4 advantage and won game away from a victory.

Down 1-0 heading into singles against the nation’s top team, the Hurricanes did not get the start they had hoped for, dropping five of the six opening sets.

In the most competitive singles match of the afternoon, 61st-ranked Wagner took No. 5 Capra down to the wire. After dropping the opening set 6-2, Wagner fought back in a much closer second set. Down 4-3, Wagner won the next three games to take the second set 6-4 and force a third set tiebreaker.  Capra served to start the tiebreaker and quickly gained a 3-0 lead. As she’d done all match, Wagner punched back, winning the next six games to take a 6-3 lead. The clash continued as Capra tied the match 7-7 and took a 9-8 lead. Wagner held off the first match point but was unable to do so a second time as Capra came away with an 11-9 win.

“Stephanie stepped up and played really well against a really good player in Capra,” Yaroshuk-Tews said. “Capra played a little bit better in big points, but it was really amazing tennis. Unfortunately, Stephanie came up a little bit short.”

Playing Chalena Scholl at No. 2 singles, 49th-ranked Laurente got down early and was never able to overcome the deficit. Laurente evened the first set 2-2 but Scholl went on to win the next four games to take the opening set. Laurente started off on the right foot in the second set, taking a 1-0 lead, but Scholl would eventually take over en route to the 6-3 win.

At three singles, Riobueno dropped her opening set 6-2 to 24th-ranked Ester Goldfield. Down 3-1 to start the second, Riobueno started a comeback and tied the set 4-4 before Golfield won the final two games to clinch the match, giving Duke a 3-0 lead.

Getting Miami on the board was Albuquerque, who took down Duke’s Rachel Kahan in straight sets 6-2, 6-2. Albuquerque set the tone for the match very early on and cruised to a first set win. In the second set, Albuquerque trailed 2-1 before winning five of the final six games to earn the victory for Miami. The win for Albuquerque marks her 12th win in a row and 10th in ACC play.

“Monique played a really good match at six for us,” Yaroshuk-Tews said. “I’m really happy with the way she’s playing, trusting her shots and the feistiness she’s showing. She’s really coming into her own”

Against No. 89 Alyssa Smith at five singles, Bolivar was defeated 6-2, 6-2, signaling the match win for Duke. Bolivar and Smith were tied 2-2 in the opening set when Smith pulled away for four straight wins. It was much of the same in the second set with Bolivar getting within a game of Smith at 3-2, before Duke took over.

Lileikite and 31st-ranked Mar battled at four singles, with Duke getting the best of the match. Lileikite did all she could to contain Mar but she pulled away for a 6-2, 6-2 win.

“We stress short memories,” Yaroshuk-Tews said. “It’s back to work this week and making sure we stay tough.”

The Hurricanes hit the road again next weekend when they take on No. 38 Florida State on Friday at 3 p.m. in Tallahassee, Fla. On Sunday, Miami will head to Clemson, S.C., to take on 15th-ranked Clemson at noon.