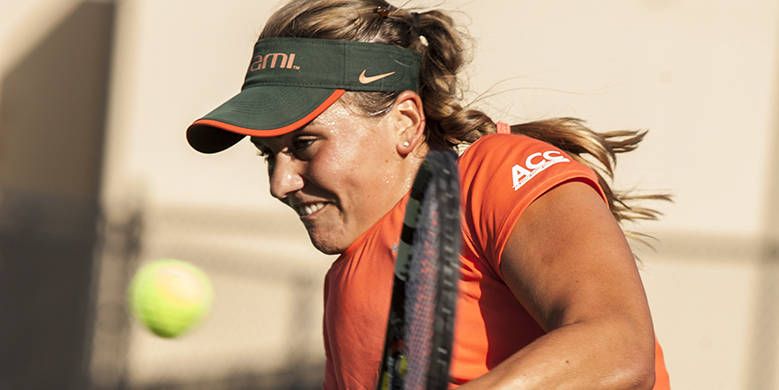 CORAL GABLES, Fla. – The Miami Hurricanes women’s tennis team checked in at No. 14 in the latest rankings, announced Tuesday by the Intercollegiate Tennis Association (ITA).

Miami (14-2, 8-0 ACC) remained in the 14th slot after not playing a match this past week. The Hurricanes last took the court on March 23, when they took down Wake Forest on the road for their 10th straight victory.

With no new individual rankings released Tuesday, Kelsey Laurente and Stephanie Wager remained in the rankings at No. 49 and No. 61. In doubles, Monique Albuquerque and Clementina Riobueno remained at No. 23, while Laurente and Melissa Bolivar stayed at No. 28.

The Hurricanes’ 10-match win streak dates all the way back to Feb. 21, when they began ACC play with a win against Maryland. Since then, Miami has rattled off consecutive wins against No. 22 Notre Dame, No. 56 Boston College, No. 19 Georgia Tech, Pittsburgh, No. 64 NC State, No. 17 Baylor, No. 68 Princeton, No. 67 Syracuse and No. 75 Wake Forest.

Miami is in the midst of a 13-day layoff between matches and returns to action this weekend when it hits the road to take on No. 6 North Carolina and No. 1 Duke. The Tar Heels and Blue Devils each have one loss in ACC play, with Duke falling to Virginia in its ACC-opener and UNC’s loss coming against Duke in February.

Miami’s match against sixth-ranked North Carolina on Saturday will begin at 11 a.m. The following day, the Hurricanes will make the short trip to Durham, N.C., and take on top-ranked Duke at noon.