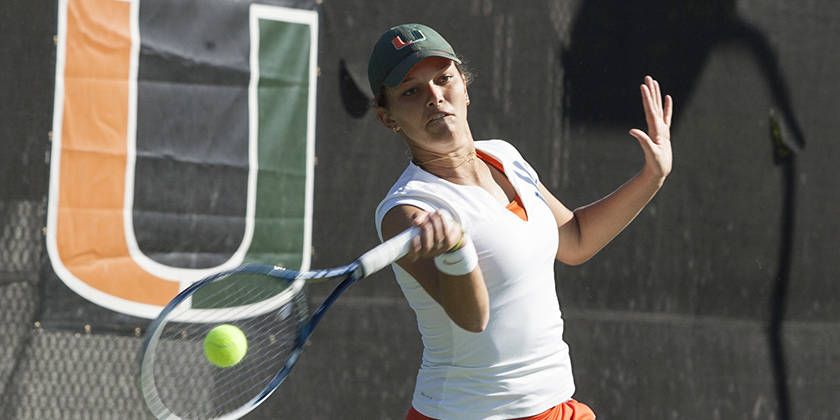 CORAL GABLES, Fla.— The No. 9 University of Miami women’s tennis team defeated Ohio State in a dual match, 4-2, on the first day of the ITA Kickoff Weekend at the Neil Schiff Tennis Center.

“In doubles, we started with good energy making sure to play on our terms,” Albuquerque said. “I think overall, we had a solid day.”

On the next court over, the doubles pair of Melissa Bolivar and Kelsey Laurente won its match, 6-4, over Gabriella De Santis and Miho Kowase.

The Hurricanes clinched the doubles point with the match between senior Brittany Dubins and sophomore Stephanie Wagner and Buckeyes Ferny Angeles Paz and Noelle Malley still in progress. Miami head coach Paige Yaroshuk-Tews was pleased with how her team played in doubles, but saw room for improvement.

“I think we came out and playing pretty well at No. 1 and No. 2 doubles,” Yaroshuk-Tews said. “Competed pretty hard at the three spot and we stayed in the match. I think we need to a better job of when we break, solidifying and holding.”

Leading the dual match 1-0 after doubles play, the ninth-ranked Hurricanes battled against the 72nd-ranked Buckeyes in singles action.

Albuquerque dominated Malley to a 6-0, 6-0 win in straight sets to notch the first singles victory against Ohio State.

“In singles, I had a good start and I kept that going throughout the match,” Albuquerque said. “It was a little fast, but it’s always good to be ahead on the scoreboards. I think it helped a little bit.”

Wagner powered past De Santis in a grueling match that resulted in the sophomore winning in a third-set tiebreaker. Wagner won the first set, 6-3, fell in the second set, 4-6, and won the 10-point tiebreaker, 10-4.

Riobueno battled in her singles match, but could not defeat Niehaus. The sophomore won the first set, 6-4, but fell in the second set, 7-5, and dropped the tiebreaker, 11-9.

Miami’s Lina Lileikite showed great competitiveness, but fell short in her match against Angeles Paz. After dropping the first set, 6-3, Lileikite evened the match with a 7-6 victory in the second set. The junior could not hold off Angeles Paz in the tiebreaker, falling 10-5

The Hurricanes return to the courts tomorrow at 2 p.m., facing LSU, who defeated USF this afternoon. The winner of Saturday’s match will advance to ITA National Team Indoors.

Live stats will be available for the matches tomorrow here. Also, be sure to follow @HurricaneTennis on Twitter.