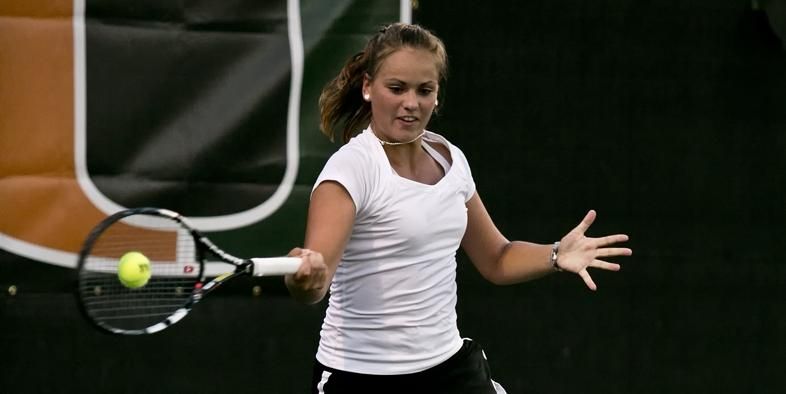 CORAL GABLES, Fla. – The 9th-ranked University of Miami women’s tennis team moved to 11-3 on the season after a 6-1 win over the visiting Brown Bears (5-7), Wednesday night at the Neil Schiff Tennis Center.

“I think Brown is a real solid team,” said Miami head coach Paige Yaroshuk-Tews. We knew today that they had a win over Maryland and they played a tight 4-3 match with NC State. We knew that this was a team that we had to beat, they weren’t going to beat themselves.”

The tone for the evening was set early in doubles on court two, as the 63rd-ranked team of Clementina Riobueno and Monique Albuquerque needed only 35 minutes to defeat the Brown tandem of Jessica Harrow and Nimita Uberoi, 8-1.

The Canes clinched the doubles point when on court three, Miami’s 73rd-ranked duo of Kelsey Laurente and Melissa Bolivar claimed an 8-3 victory over Sarah Kandath and Ammu Mandalap.

Although the doubles point had been decided, the teams decided to play out the final match on court one.

The 31st-ranked team of Stephanie Wagner and Lina Lileikite didn’t get off to the start they wanted, falling behind 3-0, then 4-1. However, the duo lived up to the ranking, taking their first lead at 7-6. The two would hold on for the 8-6 victory.

Riding the momentum of her come-from-behind doubles win, Lileikite claimed the first singles match with a 6-4, 6-3 victory on court three over the Bears’ Sarah Kandath.

Albuquerque pushed the Hurricanes’ lead to 3-0 just a few minutes later after her own 6-4, 6-3 win over Uberoi on court four.

The match clinching point came via court five as junior Melissa Bolivar downed Brown’s Ammu Mandalap, 6-3, 6-3. The win was the 11th of the season for the Colombia native.

Playing on court one for the first time in her career, freshman and the 104th-ranked Wagner defeated Misia Kraskowski, 6-4, 6-3. Her 14th victory tied her with Riobueno for the team lead in singles wins this season.

“It was a big day for Steffie,” said Yaroshuk-Tews. “I was excited to see her on court one, her parents were here to see her play for the first time in college. Unless you have ever done it, you don’t really understand the nerves involved, regardless of the team you are playing or the score of the match.

“It’s a big step for her and I think she handled it well. She deserved to be there, she stepped up and she played some good tennis.”

Miami will have only hours before they are to return to the court, as they return to ACC play, welcoming No. 35 NC State to the Neil Schiff Tennis Center Thursday at noon.

On the quick turnaround, Yaroshuk-Tews said, “They just need to stay focused. Physically, I’m not really worried about them. They need to be ready to go tomorrow.”

Live stats for the match can be found by clicking here.