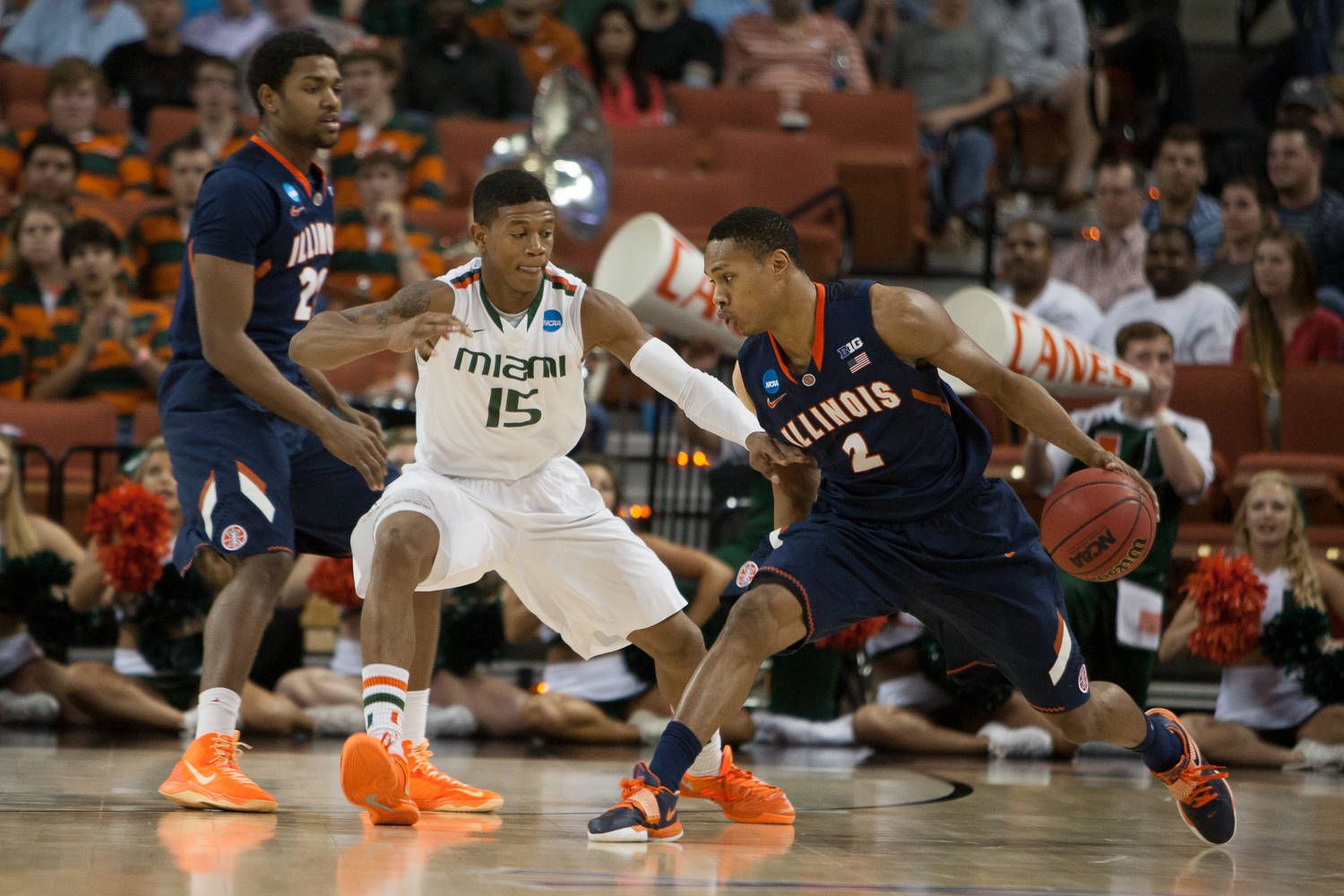 How Sweet It Is: MBB Advances to Sweet 16

AUSTIN, Texas (AP) – Shane Larkin hit a go-ahead 3-pointer with a minute left and Miami gained possession on a ball knocked out of bounds that probably should have gone to Illinois, helping the Hurricanes hold on for a 63-59 victory Sunday night to advance to the NCAA round of 16.

After Larkin’s first field goal in about 9 1/2 minutes, D.J. Richardson missed a 3-pointer. In the fight for the rebound, the ball appeared to ricochet off the hands of Miami’s Kenny Kadji out of bounds. But the Hurricanes kept the ball, and Durand Scott made two free throws after that.

Miami (29-6) is in the round of 16 for only the second time in school history. The Hurricanes play Marquette (25-8) in Washington D.C. on Thursday night.

Larkin, the only non-senior starter for Miami and the ACC player of the year, finished with 17 points. Rion Brown had 21 with five 3s.

Kadji added 10 points and eight rebounds for the Hurricanes.

Second-year Miami coach Jim Larranaga had said he planned to have more fun than any other coach in the NCAA tournament, and wanted his team to do the same.

They are, but they had to fight to the end – and get what looked like a big break – to finish off the Illini.

Brown and Larkin both had two free throws in the final 16 seconds, between a tip-in by Nnanna Egwu.

Before Larkin’s go-ahead 3, Larkin hadn’t scored since 10:29 was left in the game. He put Miami up 38-37 when he drove to the basket, cradled the ball to his side with his arm while getting fouled and then made the shot. He missed the free throw, but the Hurricanes got the rebound and Scott drove for a one-handed dunk.

Less than 2 minutes later, the lead was 46-39 after Brown’s 3 from the right corner in front of the Miami bench that sent his teammates and the Hurricanes fans nearby in a frenzy.

Just before that Miami spurt, the Illini had grabbed their first lead since midway through the first half when Tracy Abrams drove for a one-handed slam after a wild sequence that started when he missed a 3-pointer.

After the long-range miss that led to a long rebound, D.J. Richardson couldn’t get the ball while several Miami players chased it as well. But one of the Hurricanes swiped the ball right to Richardson, who got the ball to Abrams, who drove through an open gap for the emphatic basket that put Illinois up 35-34 with 12 1/2 minutes left.

The Illini missed six 3s in a row in the second half. But, as usual, they kept shooting them and Paul got them out of that slump with consecutive long-range makes.

His 3 from the right wing with 6 1/2 minutes left got the Illinois within 48-45, then after Kenny Kadji’s short hook for Miami, Paul made another 3-pointer.

They went ahead when Paul drove for a dunk that broke a 52-all tie with 3:23 left. Scott made a layup with just under 2 minutes for Miami, before Abrams made the first of two free throw attempts for a 55-54 lead that was gone on Larkin’s step-back 3.