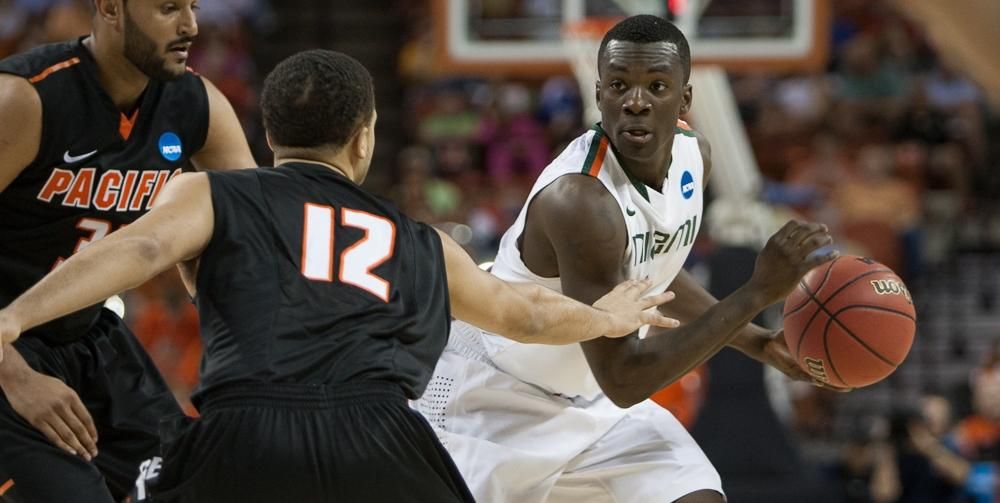 AUSTIN, Texas (AP) – Shane Larkin is sharing a special season with all those Miami seniors.

Larkin, the sophomore who is the only non-senior starter for the Hurricanes and the ACC player of the year, had 10 points and matched his career high with nine assists as No. 2 seed Miami beat Pacific 78-49 in the East Regional on Friday.

Playing their first NCAA tourney game in five years, the Hurricanes (28-6) took control with a 14-0 run midway through the first half. They went on to their most-lopsided victory ever in the tournament.

Durand Scott had 21 points with five 3-pointers for the Hurricanes, who already have four wins more than they ever had before. Reggie Johnson had seven points and 10 rebounds.

Second-year Miami coach Jim Larranaga took mid-major George Mason to the NCAA Final Four in 2006. That makes him the only ACC coach not at Duke or North Carolina to take a program that far – and he might be able to do it again, with his own ACC team.

The Hurricanes will play Sunday against Colorado or Illinois.

Pacific (22-13), the California team that played its last game for retiring longtime coach Bob Thomason, was no match for the Atlantic Coast Conference’s regular season and tournament champions.

Thomason had said last year that his 25th season at his alma mater would be his last. The Tigers gave Thomason a 20-point win over Big West Conference regular-season champion Long Beach State in his final home game, then won the league tournament for his fifth NCAA appearance.

Travis Fulton had 18 points on six 3s for the Tigers, while Khalil Kelley had 11 points and nine rebounds.

After Kelley’s three-point play with 14:35 left in the first half got the Tigers within 8-7, they went more than 7 minutes before scoring again.

Even though Larkin had a tough shooting day (2 of 8), he was in the middle of everything the Hurricanes did.

After a shot-clock violation that was one of only three turnovers by Miami before halftime, Larkin got the Hurricanes on a roll.

Larkin hit two free throws to start the Miami run, then had an alley-oop pass to Tonye Jekiri before scoring on a driving layup off the glass while being fouled and making another free throw.

Miami stretched the lead to 22-7 before Kelley’s dunk with 7:19 left finally ended the run.

On consecutive possessions in the second half, Larkin made passes and was already holding up three fingers before Scott’s 3-pointers had cleared the rim. The second around the 12-minute mark made it 59-29.

The Hurricanes were up by as much as 40-16 when Erik Swoope made two free throws with 6 seconds to go in the half. He was fouled while going up in the air in traffic trying to catch another alley-oop pass from Larkin.

Markus Duran swished a 3-pointer at the buzzer for Pacific, but the game was already well out of reach.

Thomason finished at Pacific with a 437-321 record.

Game Notes for University of Miami vs. Pacific on March 22, 2013