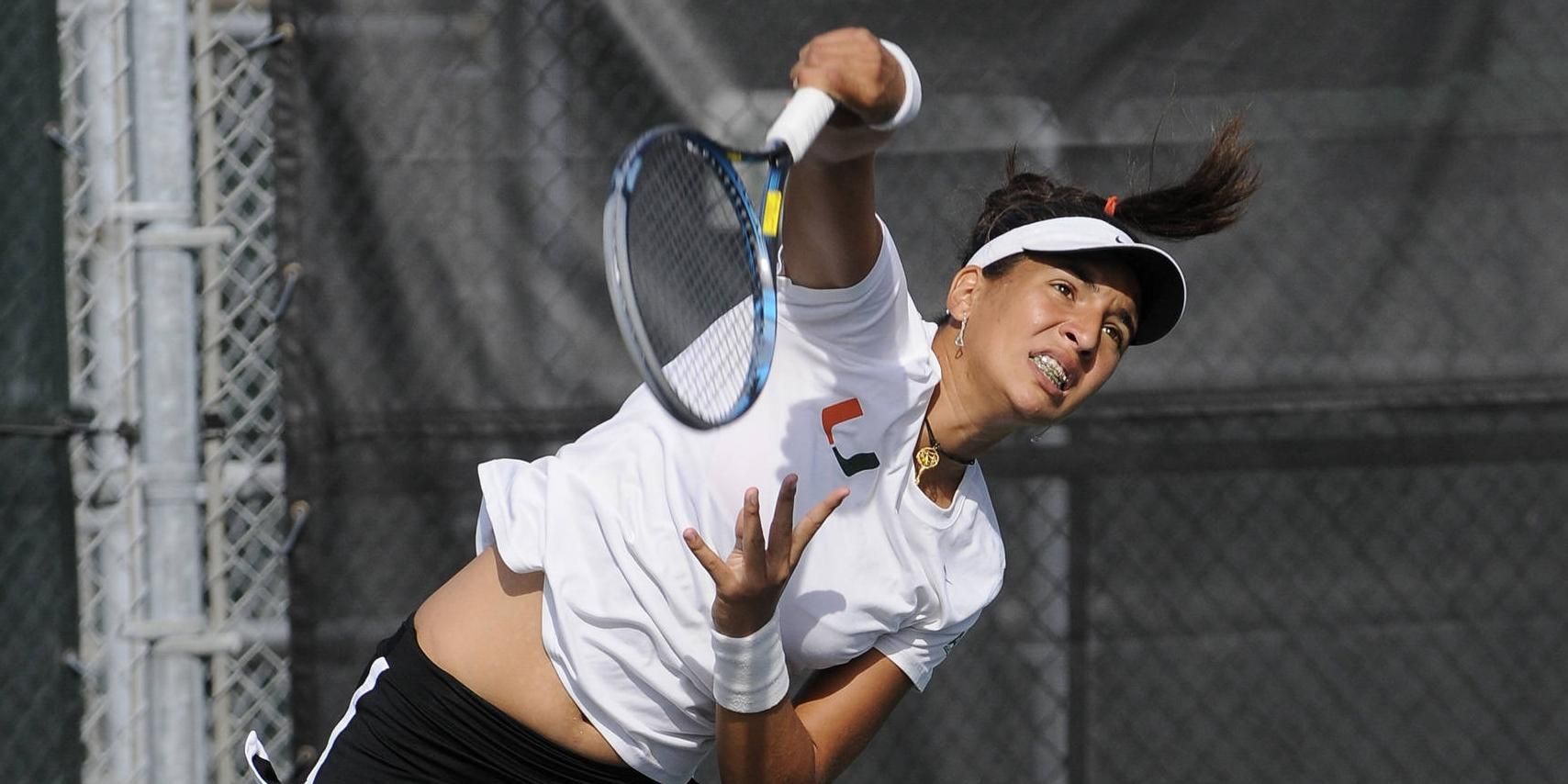 AUSTIN, Texas – Two weeks removed from a win over conference opponent No. 32 Georgia Tech, the No. 10 University of Miami women’s tennis team took down the No. 22-ranked Texas Longhorns 6-1 at the Penick-Allison Tennis Center.

“We played great doubles today which gave us the momentum early, that was essential against a team like Texas,” head coach Paige Yaroshuk-Tews said.

The win marks the first time the Hurricanes have taken the court since their March 9 victory over the Yellow Jackets.

The Hurricanes took advantage of strong doubles play led by Monique Albuquerque and Clementina Riobueno, who beat the Longhorns’ Lina Padegimaite and Lana Groenvynck 8-2 to win the first doubles point. That was followed up shortly by another 8-2 Miami win over the Longhorns, when No. 48 Lina Lileikite and Stephanie Wagner took down the No. 19-ranked doubles in the nation, Breaunna Addison and Noel Scott.

The third doubles match went to a tiebreak, which Miami won 7-3 behind strong performances by Melissa Bolivar and Kelsey Laurente to take an 8-7 win to complete the Canes’ sweep of Texas in doubles.

In singles, the Hurricanes kept momentum going in the right direction despite dropping the first singles decision in which No. 52 Breaunna Addison beat Miami’s Lina Lileikite 6-3, 6-1.

Miami rebounded quickly as Bolivar took down Groenvnynck 6-3, 6-1 to make it 2-1 in favor of the Canes.

The Hurricanes started to pull away after No. 100 Stephanie Wagner defeated Texas’ Noel Scott 6-3, 6-4. Kelsey Laurente, playing at No. 1 singles and ranked No. 81 in the nation, clinched the Hurricane victory with a 7-5, 6-1 win over No. 42 Aerial Ellis of Texas. “I am so proud of Kelsey on court one today,” said Yaroshuk-Tews. “She was smoked by Ellis in January. We gave her a plan that she wasn’t the most comfortable with but she embraced it and trusted us. As long as she keeps building on today this could really be a turning point in her career.”

The Hurricanes’ last point came from court 5 as No. 116 Clementina Riobueno won 6-2, 4-6, 1-0 (10-7) over Padegimaite. “Our business in Texas is far from complete,” warned Yarohshuk-Tews. “We need to bring to our ‘A’ game tomorrow against Baylor and finish what we started.”

Miami takes the court again tomorrow Saturday against the Baylor Bears in Waco, Texas at 2 p.m.

The Hurricanes will return to Coral Gables, Fla., for a match on Wed., March 27 as they take on the Brown Bears at 5 p.m. at the Neil Schiff Tennis Center

For more information on the University of Miami women’s tennis team, visit HurricaneSports.com. To follow the UM men’s tennis team socially, visit Twitter.com/HurricanesTennis and on Facebook at Facebook.com/MiamiHurricanesWomensTennis.