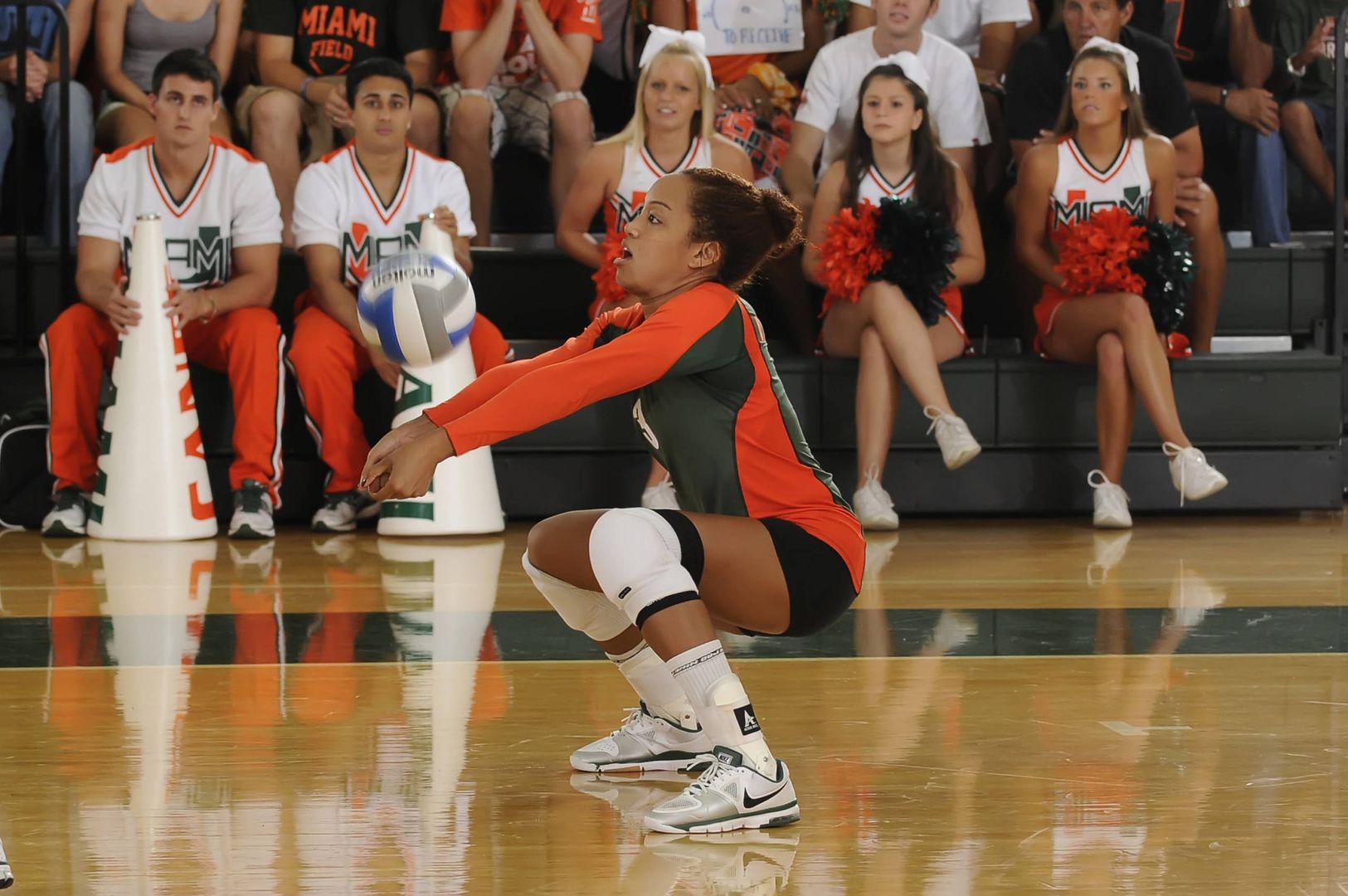 CORAL GABLES, Fla. – In two different fashions, the University of Miami volleyball team picked up a pair of victories to open the 2012 season at the Hurricane Invitational on Friday. The Hurricanes defeated Wofford, 3-0, in the afternoon before making up a 2-0 deficit to take down Ole Miss, 3-2, in the nightcap.
UM won by set scores of 25-18, 25-13 and 25-16 against Wofford and 24-26, 20-25, 25-15, 25-15 and 15-8 over Ole Miss.
“I thought our team, which might lack some experience, showed an incredible amount of composure after falling behind 2-0 tonight,” said 12th-year head coach Nicole Lantagne Welch after the match. “The effort we had to keep fighting back was evident. It was a great to start the season with two wins.”
Junior outside hitter Taylor Hollins led the way on the attack for the Canes, picking up 33 kills on the day. Formerly in the back row, she also collected 19 digs, including a double-double against Wofford.
“We have known all along what kind of outside hitter Taylor is,” Lantagne Welch said. “She was recruited to our program at that position and had been working behind some upperclassmen. Taylor has waited for this moment and brings a lot to our team.”
Sophomore Alexis Mourning and junior Alex Johnson also started their seasons strongly, with Mourning notching 23 combined kills and Johnson collecting a double-double versus Ole Miss (16 kills, 14 digs). Junior Ryan Shaffer had 39 total digs from the libero position, while senior setter Nryitha Sundararaman racked up 60 assists on the day.
Against the Rebels, UM fell behind 2-0 and struggled to find a rhythm out on the floor. However, after some lineup shuffling, the Canes bounced back to win the third set to continue the match.
“We were just trying to find a good rhythm,” said Lantagne Welch in regards to mixing up the lineup. “Our outside hitters were struggling a bit early and we were trying to find ways to make them more successful.”
Hollins notched six kills in the fourth to send the match the distance. Miami jumped out to a 9-3 advantage in the fifth set to seize control, capping the win on a kill by Johnson.
Earlier in the day, the Canes cruised in the first two sets against Wofford to grab hold of the match. The Terriers gained a 5-0 lead in the third, but Miami kept composure and came back to seal its first win of the year. The home team totaled a .462 hitting percentage in the contest, the second highest in school history.
In other action at the Hurricane Invitational, Rutgers defeated Samford and Wofford in five sets to also claim a 2-0 day. The Canes will go up against the Scarlet Knights on Saturday at 1 p.m. before closing the event with Samford at 7 p.m.
“We have been in two-a-days in preseason so they are going to be fine – matches are easier than practice,” said Lantagne Welch in reference four matches in two days. “We will have a quick turnaround, but we have been used to getting up early and we will be ready tomorrow.”
The UM matches will be broadcast on wvum.org, with a premium video stream available at Canes All-Access. Live stats will additionally be at hurricanesports.com.
The ticket office is pleased to offer season tickets for both volleyball and soccer for just $50. Season tickets to the home volleyball schedule at the Knight Complex can be purchased for $35, with single match tickets available for as low as $3. Call 1-800-GO-CANES to order your tickets today.
For all the latest information on the Miami Hurricanes, follow the official Twitter feed, @HurricaneSports, or “Like Us” on Facebook at facebook.com/MiamiHurricanes. Follow @CanesVB on Twitter for specific news on UM volleyball.