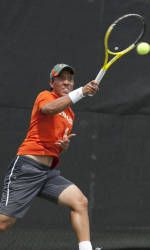 I began playing tennis because of my parents and my sisters. Everyone in my family plays tennis and I’m the youngest one. When I was four years old I was already playing but it was nothing too serious.

If I could be any comic book character, I would be Superman.

To me, the U is the best university in the world. Miami is similar to Brazil, particularly because of the weather. If I went anywhere north of here it wouldn’t be easy to adjust to the cold and the distance. I have a great relationship with all of the guys here. I love it here.

If I’m stressed I like to play my guitar. It makes me happier and brings me good feelings.

My sister wanted me to play guitar when I was younger, but I told her no way. Then, when I was 14 she bought me a guitar, so I had to play because she already spent all that money. Once I started to play I really loved it. The first song I ever played was by Pearl Jam.

If I could go anywhere in the world I would visit New Zealand. I’ve heard great things about it, and I would love to go to the other side of the world.

In 10 years I see myself working at a good company with a stable life. Who knows, maybe I’ll get married!

My dream job is to work for a big company, like Nike, perhaps in the marketing or HR department.

If I was stuck on a desert island with one food for the rest of my life, it would have to be Brazilian BBQ. It’s different than the BBQ here! So good.

Coach Mario Rincon knows what is right and what is wrong. If he thinks something is right and says he will do it, then he does it. We can talk to him about anything; if we have problems he’ll help us.

My teammates tell me that I twitch my shoulder before I start playing. I don’t believe them! I like to visualize myself playing before I go out there. It helps me prepare for a match.

My favorite movies of all time are the Lord of the Rings trilogy. The author who wrote the books was so intelligent and creative. He created his own language. It’s really inspiring.

The people I look up to the most are my parents. My father had nine siblings. When he was young he didn’t have a lot of money, and he made a living by selling potatoes and such. He got himself into law school and became a prosecutor. He climbed the ladder on his own from his own hard work.

My mother and father met when they were 16 in Brazil. My mom went back to Japan, but they kept exchanging letters. When my father passed the national test to become a prosecutor, he wrote my mother a letter asking her to come to Brazil and marry him. So that’s what they did. It’s almost like a movie love story, and I love it.

I really miss the food in Brazil, and obviously my friends and family. We have such a good life in Miami, there’s not much to miss except for that!

I like music a lot. I especially like music that has guitar. I like other types of music, too. House music gets me most pumped up before a match.

If I had a time machine I would go to the future. In the past you already know what’s happened. In the future, well, you never know.

When I’m not playing tennis or guitar, I’m studying. At least, that’s what it feels like!