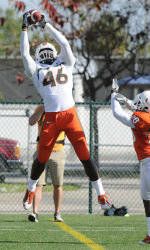 OFFENSE
The offense dominated the action early, with Mike James finding his way to the endzone from a couple yards out and Clive Walford making two touchdown grabs within the first few plays. James ended the scrimmage with 78 yards on 13 attempts and three touchdowns, including an impressive 55-yarder in which he outran the entire defense. As the scrimmage progressed, Rashawn Scott got into a groove making five catches for 115 yards and two touchdowns. Ryan Williams had a productive day, completing 14-of-21 passes for 228 yards and four touchdowns.

DEFENSE
The defense became more active as they went along after being sparked by a fumble recovery for a touchdown by Vaughn Telemaque. Defenders were constantly making plays on the ball, resulting in two forced fumbles, seven sacks and nine pass deflections. Jimmy Gaines led the defense with eight tackles and Kelvin Cain led all players with two sacks.

The Canes return to the Greentree Practice Fields on Tuesday, which is Student Appreciation Day. Anyone with a valid Canecard is invited to come watch practice for free from 9-11:30 a.m.

The next scrimmage will take place on Friday, March 30 at 6:45 p.m. at Bishop Verot High School in Fort Myers.

HIALEAH, Fla.–Good morning from Ted Hendricks Stadium for the Canes first scrimmage of the spring.

10:30 a.m. — The defense isn’t laying down, collecting a sack, a fumble recovery for a touchdown and numerous passes defended

11:00 a.m. — The defense have been ballhawks today, forcing 2 fumbles and deflecting a handful of passes.

11:15 a.m. — Ryan Williams led a long drive down the field, capped off by a 7 yard touchdown to Rashawn Scott.

11:30 a.m. — The defense forced a timely fumble at the goalline, stopping a big push by the offense.

11:35 a.m. — Ryan Williams connects with Rashawn Scott for another touchdown, this time for 62 yards.

11:40 a.m. — That’s it from Ted Hendricks Stadium. Next scrimmage is at Bishop Verot High School on Friday.