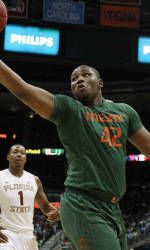 ATLANTA (AP)– Florida State fans chanted and chopped in the final minute as the No. 17 Seminoles beat short-handed Miami 82-71 on Friday night in the ACC tournament quarterfinals.

Michael Snaer scored 20 points and Ian Miller had 18 to lead Florida State (22-9) into Saturday’s semifinals against No. 2 seed Duke.

Miami was without its leading scorer, Durand Scott. The university ruled Scott ineligible on Friday for receiving impermissible benefits.

While the Seminoles are hoping to improve their seed in the NCAA tournament, Miami is unsure where it stands with the selection committee and if Scott would be eligible for the tournament.

Florida State fans had a suggestion for Miami, chanting “NIT, NIT” in the final seconds.

Florida State is returning to the semifinals after finishing third in the regular season for the third straight year. The Seminoles lost in the quarterfinals of the ACC tournament each of the last two years after falling in the 2009 championship game in Atlanta.

Bernard James and Luke Loucks each had 14 points for Florida State.

Miami struggled to score in the first game of the tournament and those struggles continued without Scott. Miami is seeking Scott’s reinstatement from the NCAA.

Friday it was sophomore Rion Brown who started for Scott and had 13 points.

Even with Scott, who leads the team with his average of 12.9 points per game, the Hurricanes didn’t light up the scoreboard in Thursday’s 54-36 win over Georgia Tech. Scott had 11 points in the game.

Miami couldn’t get it going in the first half against the Seminoles’ man-to-man defense. Miami made only 9 of 32 shots (28.1 percent) in the first 20 minutes. Florida State led 37-26 at halftime after making seven 3-pointers in the half.

Each team relied heavily on 3-pointers.

Miami stayed close early in the second half with the help of 3-pointers by Malcolm Grant, Brown and Larkin.

A three-point play by James gave Florida State a 60-52 lead, but Miami closed the gap to three points on another 3-pointer by Grant, followed by baskets by Brown and Kenny Kadji.

The reported attendance was 19,520, but many fans left after Duke’s win over Virginia Tech earlier Friday night.

Friday was the first meeting between Miami and Florida State in the ACC Tournament.

The Hurricanes are now 7-8 in ACC Tournament play and have advanced past the first round of competition in six of the last seven seasons, including three-straight.

Senior MalcolmGrant had his best scoring game (19) since scoring 21 at Ole Miss on November 25.