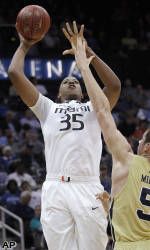 Canes Move On to Face Florida State in ACC Quarterfinal

ATLANTA (AP)– Rion Brown sparked Miami from its offensive woes with back-to-back 3-pointers, and the Hurricanes ripped off an 18-0 run to bury woeful Georgia Tech 54-36 Thursday in the opening round of the Atlantic Coast Conference tournament.

Georgia Tech ended a dismal first season under coach Brian Gregory with its lowest-scoring game ever in the tournament. Also, it was easily the worst offensive showing by any team in the tournament during the shot-clock era.

Miami (19-11) wasn’t exactly an offensive juggernaut, shooting just 33 percent. Shane Larkin was their top scorer with a mere 12 points, while Durand Scott added 11 and Brown had 10.

But the Yellow Jackets (11-20) were downright abysmal. They finished with their lowest-scoring game since a 38-36 loss to Auburn on Feb. 7, 1961. It was the third time this season Georgia Tech was held below 40 points at Philips Arena, its temporary home while the campus arena undergoes renovations.

This was the worst one yet.

Mdon Udofia scored 13 points, Brandon Reed chipped in with 11 – and no one else had more than five. Georgia Tech made 14 of 44 shots (32 percent) and turned it over 20 times.

Both teams struggled through the opening half, combining to make 14-of-51 shots from the field and coughing up the ball 15 times. That played into the hands of Georgia Tech, which came in with the ACC’s second-worst offense at just 61 points a game. The Yellow Jackets actually went to the locker room with a 20-19 lead, glad to hunker down and make every possession a challenge.

But the Hurricanes finally woke up, going ahead for good when Larkin led a fast break and passed off to Brown, who spotted up for a 3 that made it 29-27. The next time down, Larkin found Brown open again behind the arc for another trey. Another swish. The Hurricanes never let up from there.

Miami advanced to face its state rival, No. 17 Florida State, in Friday’s quarterfinals. The sixth-seeded Hurricanes are hoping to push their way into NCAA consideration with an impressive showing in Atlanta.

This didn’t qualify as impressive, but at least it was a win.

Miami is 16-4 when shooting better than 40 percent from the field, 5-0 when recording 15 or more assists and 11-3 when four or more Canes score in double figures.

With the ACC’s unbalanced scheduling, the Hurricanes have played the league’s top-three teams in the standings five out of a possible six times (Duke once, North Carolina twice and Florida State twice).

Miami advances to the ACC Quarterfinals to face third-seeded Florida State on Friday, March 9. at 9 p.m. The game will be televised on ESPN2. The Seminoles, along with the other top-four seeded teams, received a first-round bye.