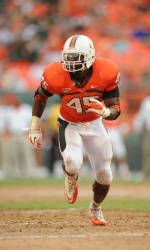 Buchanan Will Return for 2012 Season

CORAL GABLES, Fla.—Senior linebacker Ramon Buchanan has been granted a medical hardship waiver and will compete for the Hurricanes during the 2012 season. The University of Miami was notified today of the decision.

Buchanan suffered a season-ending lower-extremity injury during the first half of the Canes’ game against Bethune-Cookman on October 1.

The Melbourne, Fla. native started the first four games of the 2011 season, collecting 18 tackles, including 11 solo, two tackles for loss and a blocked kick.

For his career, Buchanan has made 15 starts in 39 games, amassed 106 tackles, 13.5 tackles for loss, two pass breakups and a blocked kick.

The Miami Hurricanes will begin Spring practice on Saturday, March 3, culminating in the annual BankUnited CanesFest and Spring Football Game on Saturday, April 14.