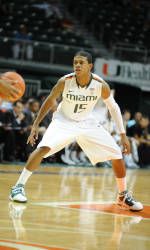 Suffering from a heavy case of preseason injuries, the Hurricanes entered the game with only nine members of the team dressed and ready for action. Despite their short roster, the team came sprinting out of the gates for a 6-2 lead less than two minutes into the game.

The Canes would begin to slow down as the half continued, however, as the Moccasins of Florida Southern took their first lead of the game with 13:05 to go.  After falling behind by nine points midway through the half, the Canes reeled off a 13-2 run, including seven points from sophomore Rion Brown, to take a 30-28 lead with 5:13 left in the frame. The Hurricanes, paced by Brown, Durand Scott and Malcolm Grant, entered the half trailing the Moccasins by a 38-33 margin.

After a slow end to their first half, the Hurricanes came out of the locker room firing on all cylinders. With two buckets from Grant (26 points) and another from Scott (23 points, seven rebounds), the team went on a 7-0 run to build a 40-38 lead less than a minute into the period.

Trey McKinney-Jones Takes the Court
Fans got their first view of transfer guard Trey McKinney-Jones on Thursday night. Despite his three turnovers, the former University of Missouri – Kansas City guard displayed his offensive prowess against Florida Southern, finishing the night with 11 points and four rebounds.

Celebrity Sightings at BankUnited Center
Miami Heat forward Chris Bosh showed up just after halftime to take in the Hurricanes’ exhibition game against the Moccasins. Bosh sat courtside only a few seats down from rapper Mack Maine, the president of music label Young Money Entertainment.