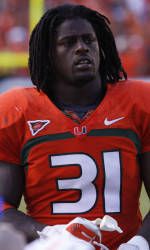 CHICAGO – On the same day that Sean Spence was named ACC Linebacker of the week for the third straight time, the senior from Miami was named as one of 12 finalists for the 27th Annual Butkus Award® honoring the nation’s top college linebackers.

It marks the second consecutive season that Spence has been a Butkus semifinalist. This year, his results have been better than ever. Spence leads the ACC in tackles for loss per game (1.58), is third among linebackers nationally and 7th overall among all NCAA players. Spence is also second among all active NCAA players in career tackles for loss with 41.5. He only trails Vincent Curry of Marshall (44).

His leadership has been so good, that normally guarded UM coaches have been quick to praise his work this season.

Al Golden said following the Georgia Tech game when the Spence-led defense held the Yellow Jackets to 134 yards rushing, “There are good years, there are great years and there are special years. Right now, he’s having a special year.”

His position coach Micheal Barrow, who has played with and coached some of the greatest UM defensive players, compared him to a future NFL Hall of Famer saying, “See what Peyton Manning means to the Colts? That’s what Sean means to our defense.”

Canes Nation is hoping that Spence can follow in the footsteps of UM Hall of Famer Dan Morgan, who won the Butkus in 2000.

The 12 collegiate semi-finalists include five returning nominees and two from the University of Alabama.

The Award was expanded in 2008 to honor linebackers at three levels while helping spread the word about Butkus’ I Play CleanTM initiative, which encourages teens to eat well, train hard, and play with attitude, instead of resorting to steroids and related drugs.  More information is available at www.iplayclean.org or at www.facebook.com/i.play.clean.

“This Award is about honoring linebackers at all levels, and reminding them that they have a responsibility to serve as role models and to give back to society,” said Dick Butkus, the legendary Pro Football Hall of Fame linebacker.