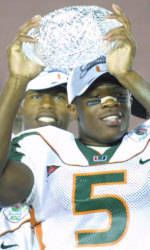 UM Honoring Past Champions at Sun Life Stadium on Oct. 27

CORAL GABLES, Fla. — Head Coach Al Golden and the University of Miami football team will have an added incentive when they take the field against the Virginia Cavaliers in primetime on Oct. 27: the chance to impress their predecessors in person.

Members of the 2001 Miami Hurricanes, the university’s third undefeated football team, have been invited to the game as honorary guests in a ten-year anniversary celebration of the fifth national championship in program history. Kickoff for the game against Virginia is set for 8pm on ESPN, ESPN HD and ESPN3D.

The football team will be joined by several other UM Champions in a new tradition of honoring both team and individual National Champions on key anniversaries.  Moving forward, the UM Athletic Department will honor individual and team national champions the year after their accomplishment, in addition to publically recognizing their five, 10 and 25-year anniversaries.

The 2001 Hurricanes, who capped off their undefeated season with a 37-14 Rose Bowl victory over the #4 Nebraska Cornhuskers, entered the year ranked #2 but spent the final seven weeks of the season ranked #1. The Hurricanes played five teams ranked in the Associated Press Top-25 in 2001, and outscored those opponents by a combined score of 236-72. The team featured talent on offense, defense and special teams, including an incredible 13 All-Big East First-Team Selections and 10 major college football award finalists. NFL Pro Bowlers Andre Johnson, Ed Reed, Jeremy Shockey, Jonathan Vilma, and Bryant McKinnie, among other former Hurricanes and current NFL players, have all been invited to attend the celebration.

In addition to former members of the football program, members of the 2001 Miami Hurricanes baseball team have also been invited to the game in honorary celebration of their historic season. Hurricane baseball legends Tom Farmer, Kevin Brown and Charlton Jimerson, as well as manager Jim Morris and the rest of the 2001 championship team, will all be honored athalftime of the game.

The 2001 Hurricanes baseball team, who entered the College World Series as the #2 seed, scored 49 runs over its four postseason games to earn their fourth championship in school history. The team routed #4-seeded Stanford 12-1 in the final and featured four players on the All-Tournament team.

This year for the first time, UM will begin a new tradition of honoring individual NCAA Champions from throughout the storied history of Miami Hurricanes athletics. Former tennis stars Lise Gregory and Ronni Reis, who teamed up for an NCAA doubles championship in 1986, have been invited to attend in celebration of their 25-year anniversary.

Two former Hurricane track and field stars will also be celebrated for their championship performances. Tabia Charles, a 2006 NCAA champion in the outdoor triple jump and a 2008 Olympics finalist in Beijing, and Ti’erra Brown, the first Hurricane to ever win a USA Title at the U.S. Outdoor Track and Field Championships and 2011 400-meter Hurdle NCAA Champion, will be honored for their accomplishments.

Brittany Viola, who won two NCAA championships (2008 and 2011) and was named captain of the 2009 U.S Diving Team at the World Aquatics Championships in Rome,
is among the other former student-athlete champions invited to the Oct. 27th game against the Cavaliers.

Tickets for the Miami Hurricanes match-up with the University of Virginia at Sun Life Stadium are still on sale. Click here for more information.