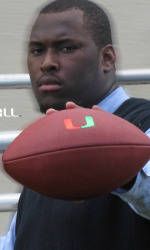 Behind the Facemask: Jermaine Johnson

I love my quarterbacks, you know, they give us yards. You have to protect the quarterback. Jacory, Stephen Morris, I always hang around with those guys. Seeing them go down as an offensive line and it breaks your heart. They do so much for the team, as a captain. They conduct the whole offensive. I don’t know I just love my quarterbacks.

I’ll never forget when I was 14-years old, I was playing AAU basketball for the South Florida Heat. We won the national championship. It was one of the days I couldn’t forget. I always have that in the back of my head.  I only scored like 10 points. We had a superstar team so you don’t need that many points.

Playing football has given me motivation, you know, determination. I didn’t really know I was going to play football until my senior year of high school. Football to me is hard work. It brings you close to people, like your teammates and people you don’t know. It’s a team sport and I love that. I only played one year, only my senior year of high school at St. Thomas Aquinas. I played offensive line and some defensive line too. I just got some looks and lucky me.

The U growing up was one of my favorite teams I used to love to watch them play. You know, me and my uncle, my grandma, we always used to sit in the living room on Saturday mornings or nights, whenever the game comes on. We would just cheer them on. I always wanted to be a Miami Hurricane. I told my uncle before he died, I said “I’m going to play for the Hurricanes. I’m going to play for them.” All of a sudden, it’s a dream come true. Mostly, I did this for him because he was a huge hurricane fan.

I was raised in Pompano Beach, Florida. I lived with grandma, granddad, mom, my auntie, uncle, my great-great grandma. We were all bunched up in one house. We didn’t really have much. I am very family oriented. I just love being around my family. I do still, to this day, go to my grandma’s house and spend the night there. She’s been living there since I was born.

Offensive line is a brotherhood.It’s a brotherhood thing. Ever since I’ve been here, I got real close with my offensive lineman and who I’ve been working with. Everything on the offensive line is done together; it’s not done by one. You need your brothers there with you; you need to help them with the fight. Every down, every aspect of the game, you know, being an offensive lineman is just hard work and determination, like I said before. It just brings the best out of you. You just show love for your teammates, you really appreciate what they help you to do and what you do for them.

At the U, I’ve learned so much from to be honest with you, Coach Golden has taught us so much about growing up and trying to be men, on and off the field. Camp was a perfect example. With the NCAA situation, we’ve had to face adversity and we’ve done that. We still got the team and we fought through that. We told ourselves we would do that and look where it’s got us now. We’re jumping around in practice, working hard, doing everything to change this program around.

Competition is everywhere, from the top to the bottom of the depth chart. You know, you’re gonna get competition anywhere you go. No matter where you are, time and a place there is always competition around here. You just have to be ready for it and just bring it.

Best advice came in high school, I can remember, Coach Smith, St. Thomas Aquinas head coach. When I first got there as a freshman, I was tall and skinny, I had some pounds on me but I wasn’t like how I am right now. Every time I walked around school, going to class, he would bump into me and say “You need to play football son, I’m telling you you’ll go anywhere in the country.” I looked at him and I’m like, you crazy man, I’m not playing football. I was built for basketball. My senior year everything just clicked because I wasn’t getting too good at basketball because of my size. It just clicked right there and I went out and tried football. He was like, “this is the best decision you’ll ever make in your life,” and look where it got me right now.

The Golden Era. All I can say is, let’s get this thing going. We’ve worked too hard. We worked way too hard through spring, through camp, and fall practice. I never worked this hard in my life. I’m trying to get this thing going and win some games and championships.

I’m afraid of my mom. When I was in middle school, I would be afraid to come home because of my mom. I always got bad grades in school when I was in middle school. I used to be afraid to come home to my mom because she would always have that belt waiting for me. I would always tell my friends “I’m walking to the boys and girls club.” I was like I’m not going home, my mom’s gonna kill me. I would make the situation worse by coming home late night from the boys and girls club when she told me to come home at curfew. I’m afraid of my mom because she has so much control over me. I guess I’ll say that because I’m a momma’s boy. I started making good grades my sophomore year of high school. It just clicked. I realized that if I didn’t get my grades up then I wasn’t going to go to college. I had to get real serious my senior year with ACT scores. If I didn’t have that, I would probably be a JUCO right now.

I admire my mother. She is a single-parent taking care of five kids in one house with three bedrooms. She works so hard. She works every day. She calls me every day and says, “I’m so tired, but I gotta keep doing this, I gotta do this, I gotta do this for the kids.” That is what I admire the most about my mom because she is a hard-worker. I’m the oldest and my oldest sister just turned 16. My other sister is eight. My brother is 12 and my youngest sister is five. They call me every day.

To read more features, go to Behind the Facemask Central.