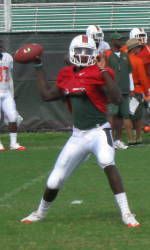 Camp Report: UM Gets Back to Work after Scrimmage and Day Off

CORAL GABLES, Fla.– The University of Miami football team got back to work Tuesday morning after holding the team’s first scrimmage of fall camp on Sunday. After a day away from the practice fields on Monday, the team returned to Greentree for its third two-a-day session of fall camp today.

The Hurricanes worked out in full pads and participated in full contact drills towards the latter half of the session prior to heading inside to eat and watch film in preparation for Tuesday evening’s practice.

GETTING BACK TO WORK
Overall, Al Golden was pleased with the Canes’ performance in Sunday’s scrimmage, but he mentioned afterwards there is still a lot of work to be done before the team’s season-opener at Maryland on Labor Day weekend. Much of Monday was spent reviewing film from the scrimmage, while Tuesday’s early work focused on cleaning up some areas of concern.

PACKERS, LIONS VISIT PRACTICE
Scouts from the Green Bay Packers and Detroit Lions were in attendance during Tuesday morning’s practice, marking the first time either team has had a scout present this year at Greentree. Since the beginning of fall camp, members from 12 different NFL organizations have attended UMiami practices.

Offense
QB Jacory Harris – Harris picked up right where he left off after a solid performance in Sunday’s scrimmage, looking sharp in directing the offense throughout the morning. The senior completed the majority of his passes and picked up decent yardage when forced to scramble. At the end of the session, Harris methodically led the offense down the field in a two-minute drill, capping it off with a 6-yard touchdown pass to running back Mike James.

C Tyler Horn – Not only has Horn been one of the Canes’ most consistent performers in camp, but the senior center continues to take a leadership role not only with the offensive line, but with the entire team. On several occasions on Tuesday, Horn could be heard above others coaching up his teammates in between plays. His impact was just as evident once the ball was snapped, as seemingly every play he is in the right spot and holding his ground.

Defense
DB Mike Williams – Yet again, Williams continues to impress early in camp. The Wake Forest transfer is consistent in coverage and maybe more noticeably, he isn’t afraid to tackle. Several times throughout the morning, running plays that bounced to his side of the field were quickly stalled, as Williams fought off his receiver to meet the back near the line of scrimmage. Being a veteran, he clearly understands the importance of being a well-rounded corner.

DE Andrew Smith – One of many defensive ends expecting to be a part of the rotation this season, Smith stood out on Tuesday with consistent pressure in the backfield, several tackles and a big pass break-up late in the session. Heading into his final season with the Canes, Smith has played in 30 career games and is coming off a year in which he tied for fourth on the team with three sacks

HERE for a photo gallery of some of the action from Greentree today.

REVISITING BEHIND THE FACEMASK
Throughout camp, we will revisit some of our favorite Behind the Facemask stories that have been running throughout the summer. Today, we’ll take a look back at Malcolm Bunche’s story….

“I was raised in a family that pushed me. They were disciplinarians. If I acted up, I got in trouble. If I did what I was supposed to do, they rewarded me.”

Behind the Facemask: Malcolm Bunche

IN CASE YOU MISSED IT
The University of Miami held its first scrimmage on Sunday at Greentree Practice Fields. Tommy Street hauled in three touchdowns, while quarterbacks Jacory Harris and Stephen Morris combined for five touchdown passes and only one interception.

For a complete recap of Sunday’s scrimmage, please click HERE.

NEXT PRACTICE
The University of Miami returns for the second of two Tuesday practices later this evening. This is the third two-a-day practice session for the Canes during the fall camp.

SEASON TIX
Season Tickets for the start of the CLICKING HERE.