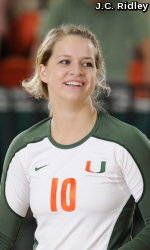 Canes Volleyball: Can U Dig It with Ryan Shaffer

Coral Gables, Fla. – The University of Miami volleyball team is exactly 13 days away from the 2011 season opener versus Jacksonville State at the Tiger Classic hosted by LSU in Baton Rouge, La. Leading up to the highly-anticipated season-opener for the two-time NCAA participant Canes, HurricaneSports.com will be running a Q&A series titled “Can U Dig It” with student-athletes from the volleyball team taking you inside their world and allowing you – the fans – the chance to learn more about them away from the court.

The series-opener features libero Ryan Shaffer, a sophomore from San Jose, Calif. In 2010, she was twice named Atlantic Coast Conference (ACC) Freshman of the Week (Nov. 22, Nov. 29). In finishing the season with a team-leading and ACC fourth-best 539 digs, Shaffer etched her name in the UM record books for the most digs in a single-season by a freshman, as well as placing herself fourth all-time in school history for digs by any player during a season.

Make sure to check in for a new Can U Dig It profile each and every day in preparation for the Hurricane volleyball season opener.

Can U Dig It with Ryan Shaffer
Hometown… San Jose, Calif.
High School… Archbishop Mitty
Major… Sports Administration
The farthest place from home I’ve been is… Miami, Fla.
The most influential person in my life is… My mother
If I could switch places with any movie star, it would be… Jessica Alba
Favorite Professional Athlete… Brian Wilson
Favorite Pro Sports Team… San Francisco Giants
Favorite Movie… Despicable Me
My favorite show growing up was… I liked all shows on Nickelodeon
My favorite Class at UM is… Sports Injuries
When I was little, I always wanted to be… A mom
My favorite thing about being part of the “U” family is… I like the people here a lot and how everyone here has that “U” swagger.
My favorite memory playing volleyball is… Winning the state championship two years in a row in high school
If you walked into my bedroom, the first thing you would notice is… How messy it is
My favorite midnight snack is… String cheese
The weirdest thing I’ve ever eaten is… Alligator
A pre-match ritual of mine is… I really don’t have anything. I guess going with the team to Panera.
If I could live anywhere in the world, then it would be… Santa Barbara, Calif.
An artist no one would believe I have on my iPod is… Donnell Jones
My nickname is… Everyone just calls me by my last name.
I hate to admit it, but I love… Country music
If I could have an actress play me in a movie, then it would be… Jessica Simpson
If I had to live off one meal the rest of my life, then it would be… Chicken fingers and French fries