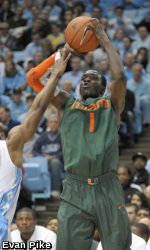 CORAL GABLES, FLA… The University of Miami men’s basketball team returns home to the BankUnited Center to play host to North Carolina in ACC action on Wed., Jan. 26, in a game to be broadcast nationally on ESPN2.

The Hurricanes are 8-1 at the BankUnited Center this season, including the 72-71 win over Boston College on Jan. 15. Miami returns to the hardwood following back-to-back two-point losses in conference play — one week ago to Florida State (55-53) and on Sunday at NC State (72-70).

THE SERIES After a week off from competition, North Carolina arrives in Coral Gables having won six of its last seven games — including the 75-65 victory over Clemson at home on Jan. 18. The Tar Heels lead the all-time series 14-2 over Miami, including winning the lone game between the programs last season 69-62 in Chapel Hill for the program’s 2,000th win. The Hurricanes have not played 2,000 games to date.

The Hurricanes defeated North Carolina in the BankUnited Center’s first ever game 64-61 in overtime on Jan. 4, 2003.

HURRICANE GAMEDAYHurricane Gameday with Frank Haith makes its season debut on CSS (Comcast Sports South) on Wed., Jan. 26, at 5:30 p.m. Hosted by Joe Zagacki, the voice of the Hurricanes, and Josh Darrow, each show will break down the latest with the team and give fans insight into the players both on and off the court.

Beginning with Wednesday’s game versus North Carolina, the Hurricanes will host three of its next four at the BankUnited Center. UM has played three of its first five conference games on the road.

Malcolm Grant tied a school-record shooting five-for-five from long range versus the Wolfpack en route to a game-high 23 points. Four other Hurricanes have hit all five three-point attempts in a game — Robert Hite (vs. Virginia Tech, 2004), Trevor Burton (vs. Georgetown, 1993), Samarr Logan (vs. Davidson, 1990) and Levertis Williams (vs. FIU, 1988). Grant has hit a three in 16 of 19 games this season, with three-plus treys 10 times, including in six of the last eight games.

Finishing with 20 points, a game-high 14 rebounds and a career-high five blocks, sophomore big man Reggie Johnson notched his ninth double-double of the season. He moves into a three-way tie with Tim James (1998-99) and Joe Wylie (1988-89) for seventh place in UM history with as many double-doubles in a single-season.

SECURE YOUR SEATS NOW Individual game tickets for Miami’s ACC games are now on sale to the general public. The Hurricanes will host a regular slate of eight ACC games, welcoming the last two national champions to the BankUnited Center in top-ranked Duke on Sun., Feb. 13, and 2009 champs North Carolina on Wed., Jan. 26. Prices for most ACC games begin as low as $15. For additional information or to order season tickets, please contact the Hurricane Ticket Office online at www.hurricanesports.com or by phone at 1-800-GO-CANES.