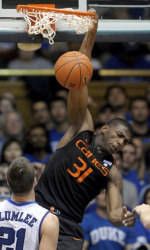 CORAL GABLES, FLA.—Hurricanes fans are invited to tune into tonight’s Hurricane Hotline to catch the latest on University of Miami athletics directly from the source. The show will air live from 7-9 p.m. on 560AM and online at WQAM.com.

With college basketball in full swing, the show will then turn its focus to Miami hoops as men’s head coach Frank Haith will recount the team’s efforts in its ACC opener at top-ranked Duke and preview the next conference battle at Clemson. The 11-4 Hurricanes, winners of nine of their last 11 games, will also be represented on air by a pair of student-athletes, including junior swingman DeQuan Jones.

Jeff Goodman, a senior college basketball writer for FOXSports.com, will join the show to add a national perspective.

Head women’s coach, Katie Meier, whose 14-1 team opens ACC play tonight at Virginia, will also be featured on the program.