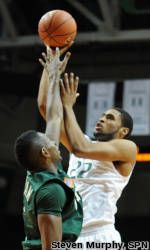 LAS VEGAS, NEV. – The University of Miami men’s basketball team heads west to participate in the Las Vegas Holiday Hoops Classic at South Point Arena. The Hurricanes — who are playing four neutral site games over a six-day span — will play three games over three days in Las Vegas, beginning with Oral Roberts on Tues., Dec. 21, followed by Rice on Wed., Dec. 22 and Akron on Thurs., Dec. 23.

Miami opened the Classic with a 68-54 win over Stetson at home at the BankUnited Center on Dec. 12. In other competition between Classic squads, Rice knocked off UALR, 65-55, at home on Dec. 16.

The Hurricanes, who have won five of their last six games, have three players averaging double-figure points, led by Malcolm Grant’s 14.3 points per game – including 2.5 threes an outing at a 43.1 percent clip. Durand Scott adds 13.8 points and a team-high 4.1 assists per game, while Reggie Johnson contributes 11.5 points and 9.3 rebounds an outing.

THE FIELDOther than annual in-state opponent Stetson — alma mater to Miami associate head coach Jorge Fernandez, the Hurricanes have only played one other Classic competitor in program history, entering the Classic with a 1-1 series tie with Oral Roberts. The teams last met Feb. 5, 1989, with the Golden Eagles coming away with the 99-92 home win. Miami defeated Oral Roberts, 108-103, at home in the inaugural meeting between the programs on Nov. 28, 1988. This week’s contests mark the first games between Miami, Rice and Akron.

SCOUTING THE OPPONENTAt 4-6, Oral Roberts has split its last four games and rides a two-game skid into this week’s tournament, coming off road losses at Oklahoma (73-60 on Dec. 11) and Missouri (81-62 on Dec. 16). Of 10 games this season, the Golden Eagles have played eight on the road – including six straight. Oral Roberts has four players averaging double-figure scoring, led by 6-6 junior forward Dominique Morrison’s 17.4 points, 5.2 rebounds and 2.5 blocks per game. He finished with 18 points, going 3-of-5 from long range, with four rebounds at then-No. 13 Missouri.

THOMAS FOR THREEAdrian Thomas – who led the ACC in three-point field goal percentage (.421) in 2010 – is hot from long range once again, hitting 16-of-28 three-point attempts over the last four games — converting 57.1 percent from beyond the arc.

Thomas’ .397 career three-point field goal percentage is tied for fourth-best in Miami history with Trevor Burton (1989-93), while his 138 career treys surpass the 136 career threes by assistant coach Jake Morton, who played for the `Canes from 1988-93 for ninth place in the UM record book. Those 138 career threes are third-most among active ACC players.

Going 4-for-5 from long range in the opening half versus UCF propelled Thomas past Coach Morton for ninth on Miami’s career three-point list. He is now 26 threes out of eighth place, held by Johnny Hemsley (1996-2000) with 164 treys over his career. Thomas has now hit a three-pointer in 52 of his last 58 games and finished with 12 points versus the Knights for his fifth-straight game in double figures.

Both have also improved their accuracy from the line, with Grant hitting 24 of his last 25 attempts from the charity stripe — in just the last three games — for a 96 percent accuracy. For the season, Grant is shooting 87.8 percent to rank sixth in the conference, while Scott has converted 83.3 percent of his free throws (up from 67.0 percent as a freshman last season) to rank 10th in the ACC. Scott went 12-of-13 from the charity stripe in the win over Ole Miss, and Grant followed that up with 13-of-14 shooting in the win over West Virginia.

DID U KNOW?Following Saturday’s Orange Bowl Classic, the Hurricanes are ranked No. 21 in both the RealTime RPI and CollegeRPI.com rankings — the fourth-highest ranked squad in the ACC, behind Duke at No. 4, Boston College at No. 15 and North Carolina at No. 18. Miami has already played three road games — including at nationally-ranked Memphis, one SEC squad and a pair of Big East opponents (including a win over RPI-No. 11 West Virginia – and one game on a neutral court.

NEXT UP FOR THE `CANES Following this week’s tournament, the Hurricanes will enjoy a few days off for the holidays and then return to the hardwood to play host to Pepperdine on Thurs., Dec. 30, at 6 p.m. The men kick start a doubleheader with UM’s women’s squad, who will then face Morgan State at 8 p.m.