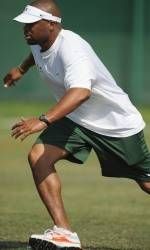 Barrow will coach linebackers, Hill will serve as the wide receivers coach and recruiting coordinator while Stoutland will coach the offensive line.

The announcement of Barrow, Hill and Stoutland being added Golden’s staff does not necessarily rule out the possibility of other current Miami assistants joining his staff at a later date.

Barrow has served as a defensive coach at Miami since 2007, serving as linebackers coach in 2007, 2008 and 2010 and as a defensive assistant in 2009. Barrow, who also works with Miami’s special teams, has played an important role in the development of Sean Spence and Colin McCarthy, both of whom have already reached the 100-tackle mark this season. He has also been instrumental in the development of several linebackers that are currently playing in the NFL – Tavares Gooden of the Ravens, Darryl Sharpton of the Texans and Spencer Adkins of the Falcons. As a player, Barrow earned All-America honors at Miami in 1992, winning BIG EAST Defensive Player of the Year while finishing seventh in Heisman Trophy voting and second in the Butkus Award voting. From 1989-92, Barrow tallied 423 tackles – the fourth-most in school history. He went on to play 13 seasons in the NFL, recording 1,133 tackles and 43 sacks in 173 career games with five different teams.

Hill has coached Miami’s receivers the last three seasons and served as the program’s recruiting coordinator for the last year. Since 2008, Hill has guided one of the top receiving corps in the nation at Miami. Headlined by All-America senior Leonard Hankerson, Hill’s top three receivers combined for 2,178 yards and 16 touchdowns in 2010. Hankerson recorded arguably the most productive season for a wide receiver in school history in 2010, catching a school-record 12 touchdowns while becoming the first player in school history to record 2,000 receiving yards in a career and 1,000 yards in a single season. Hill has also overseen the development of Travis Benjamin, who recorded 293 yards as a freshman, 501 as a sophomore and 699 so far this year as a junior. Before arriving in Coral Gables, he spent three years on the University of Pittsburgh coaching staff, where he tutored first-team All-Big East performers Greg Lee in 2005 and the tandem of Derek Kinder and freshman All-American Oderick Turner in 2006.

Stoutland has served as Miami’s interim head coach since Nov. 28, 2010 and has coached the Hurricanes’ offensive line the last four years. As one of the nation’s most respected line coaches, his lines at Miami, Michigan State and Syracuse are well known for their outstanding run-blocking. In 2010, his offensive linemen earned All-ACC weekly honors five times, while the ‘Canes have rushed for more than 200 yards in five of Miami’s last seven games. Stoutland has overseen the development of numerous All-ACC players in his tenure in Coral Gables, including current Detroit Lion Jason Fox, as well as Brandon Washington and Seantrel Henderson, among others. Prior to joining the Miami staff, Stoutland spent seven seasons as the offensive line coach at Michigan State, following three years as an assistant coach at Syracuse and four years at Cornell.

Miami will take on Notre Dame in the Hyundai Sun Bowl on Dec. 31 at Sun Bowl Stadium in El Paso, Texas. Stoutland will continue to serve as the team’s interim head coach up to and during the game.