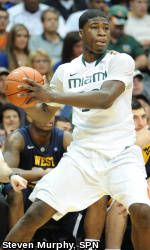 Hurricanes Take on Stetson on Sunday at 4 p.m.

CORAL GABLES, FLA. – The University of Miami men’s basketball team opens the Las Vegas Classic with a home game versus Stetson on Sun., Dec. 12, before continuing the tournament with three games in Las Vegas from Dec. 21-23 versus Oral Roberts (4-4), Rice (4-4) and Akron (4-2), respectively.

The Hurricanes ride a four-game win streak into Sunday’s showdown versus the Hatters, who have defeated an ACC opponent on its home court this season — defeating Wake Forest, 89-79, on Nov. 12. The Hurricanes return to action after a week off from competition for final exams. Before the break, Miami put together a strong week, knocking off Ole Miss, 86-73, and West Virginia, 79-76.

The Hurricanes have three players averaging double-figure scoring — including 14.1 points apiece from guards Durand Scott and Malcolm Grant. Scott also adds a team-high 4.3 assists per game, while Grant knocks down a team-high tying 2.5 threes per game at a 40.8 percent clip. Reggie Johnson contributes a double-double of 12.9 points and 10.0 rebounds an outing and leads the nation in offensive rebounding percentage, grabbing 23 percent of the available offensive boards when he is on the court.

CATCH THE GAME ONLINEunday’s game versus Stetson will not be televised, but will be available on radio at 560 WQAM (WQAM.com) and at 90.5 FM (WVUM.org). In addition, it will be streamed live online on `Canes All-Access. The service is $9.95 a month or $79.95 per year. Visit hurricanesports.com/allaccess/ to sign up.

HATS OFF TO HANKERSONUM senior wide receiver Leonard Hankerson has been named the recipient of the College Football Performance Awards 2010 Elite Wide Receiver Trophy and will receive his award during the first half of Sunday’s men’s basketball game versus Stetson.

SCOUTING THE HATTERS In addition to the win over Wake Forest, Stetson comes off its second road win of the season — a 74-64 decision at North Florida on Sat., Dec. 4. Three Hatters scored in double figures in that game, led by 20 points — including 5-of-6 shooting from beyond the arc — by Aaron Graham. Ridge Graham — who leads Stetson with 16.4 points an outing — added a double-double of 15 points and 10 rebounds in the win.

HOME SWEET HOME Miami has won 18 consecutive non-conference regular season games at home and is 5-0 at the BankUnited Center this season. Over the last four seasons, the Hurricanes have compiled a 43-10 (.811) record at home and are 73-27 (.730) at home in their seventh season under head coach Frank Haith — including nine wins over ranked opponents. The Hurricanes have notched double-digit home wins at the BankUnited for three-straight seasons and six times in seven full seasons calling the arena home.

DID U KNOW? Following Saturday’s win over West Virginia, the Hurricanes are ranked No. 14 in RealTime RPI rankings — the second-highest ranked squad in the ACC, behind Duke at No. 5. Miami has already played three road games — including at nationally-ranked Memphis, one SEC squad and a pair of Big East opponents.

LAST TIME OUT Malcolm Grant scored a career-high 26 points to lead Miami back from a 13-point deficit with 12 minutes left to defeat West Virginia, 79-76. The Hurricanes scored on 14 of 15 possessions down the stretch, sank eight of their last nine shots and made four straight free throws in the final nine seconds to seal the win.

West Virginia (5-2), playing for the first time this season on an opponent’s court, was up 54-41 before Miami rallied. Grant’s three-point play cut the deficit to one, and he then sank a 3-pointer that gave the Hurricanes their first lead of the second half, 66-64.

Reggie Johnson, who is averaging a double-double this season, was limited by foul trouble to 20 minutes but still managed 14 points and seven rebounds. Adrian Thomas added 13 points, including consecutive 3-pointers to trigger Miami’s rally.

Miami’s second-half comeback versus West Virginia was its largest since rallying from a 17-point deficit with 12:30 to go at home versus Maryland for the 62-60 win on Jan. 14, 2009. In addition, Miami converted 47.3 percent from the floor versus West Virginia — the best shooting for a Mountaineer opponent since then- third-ranked Duke hit 52.7 percent of its shots to knock off WVU, 78-57, in the NCAA Final Four on April 3.

THE VETERAN Adrian Thomas was the ACC’s leader in three-point field goal percentage (.421) in 2010. He’s starting to warm up again and has gone 9-for-15 over the last two wins over West Virginia and Ole Miss, converting 60 percent from long range. His 131 career threes rank third-most among active ACC players and is within three threes of Miami’s top-10 all-time career three-point leaders. Kevin Norris (1994-98) is 10th with 134 career treys. Thomas’ .391 career three-point field goal percentage is fifth-best in Miami history.

NEXT UP FOR THE `CANES Following Sunday’s game versus Stetson, Miami will take a short road trip to the BankAtlantic Center in Sunrise, Fla., to face UCF in the opening game of the Orange Bowl Classic on Sat., Dec. 18. Undefeated UCF knocked off Florida in Gainesville last week en route to a 7-0 record and is led by Marcus Jordan — son of Michael — with 16.4 points per game.

TICKET INFORMATIONFriday is the last day to take advantage of the ACC Weekend 4-Pack, allowing fans to secure tickets to see the Hurricanes take on top-ranked Duke on Feb. 12. Individual game tickets for ACC men’s basketball games are now on sale to University of Miami season tickets holders and Hurricane Club donors. For additional information or to order season tickets, please contact the Hurricane Ticket Office online at www.hurricanesports.com or by phone at 1-800-GO-CANES.