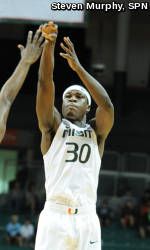 CORAL GABLES, FLA. – The University of Miami men’s basketball team returns home to the BankUnited Center to take on McNeese State in the first meeting between the programs on Wed., Nov. 24, at 7:30 p.m. The game will be web streamed live on HurricaneSports.com and is available by radio on 90.5 FM and online at WQAM.com and WVUM.org.

Wednesday’s game is in the midst of a four-game stretch over eight days for the Hurricanes– including a pair of contests on the road. Miami split the first two games over this span, cruising past North Carolina Central at home last Friday before dropping Sunday’s game at Rutgers.

Beginning in 2010-11, HurricaneSports.com will provide a live web stream of non-televised games through `Canes All-Access. Sign up online to receive exclusive access for $9.95 per month or $79.95 for a year.

Log onto HurricaneSports.com during Miami athletic events to chat with Miami insiders and other fans about the game and your favorite student-athletes. To join the chat, click on the Cover It Live program found online with each game’s preview beginning 30 minutes before tip-off.

Despite being edged by one rebound at Rutgers for the first time all season, the Hurricanes continue to lead the ACC with a +11.2 rebounding margin over four games this season. Miami posted back-to-back +20 rebounding margins last week, building a +20 advantage at Memphis and then a +26 margin in its home win over North Carolina Central.

After posting the first double-double of his young career at No. 19 Memphis, Reggie Johnson has now notched three-straight double-doubles for the Hurricanes – including a 12-point, 14-rebound effort at Rutgers. His three double-doubles ties FSU’s Chris Singleton as the second most recorded by an ACC player this season. Maryland’s Jordan Williams has an ACC-leading four double-doubles in 2010-11.

Junior Malcolm Grant extended his three-point streak to 11 straight games after hitting one from beyond the arc at Rutgers. Grant’s streak is the second-longest active streak in the ACC behind Florida State’s Deividas Dulkys, who has hit a three in 13-straight games.

NEXT UP FOR THE `CANES

Following Wednesday’s contest versus McNeese State, the Hurricanes will cross the state of Florida to take on Florida Gulf Coast on Sat., Nov. 27. Following this stretch, Miami will play host to three-straight opponents – Ole Miss, West Virginia and Stetson – at home at the the BankUnited Center.