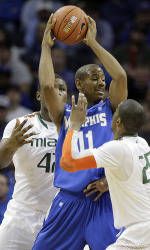 MEMPHIS, Tenn. (AP) – Joe Jackson scored 10 of his 17 points in the second half, and No. 19 Memphis escaped a poor shooting night to beat Miami 72-68 early Tuesday.

Chris Carmouche had 13 points and Wesley Witherspoon added 12 for Memphis (2-0), despite making only 1 of 5 shots from the field. Antonio Barton finished with 10 points for the Tigers, who shot 34 percent, and managed only 4 of 22 from 3-point range in a game that began at Midnight.

The Hurricanes (1-1) received their expected scoring from guards Duran Scott (20) and Malcolm Grant (18). But they also got stellar play from Reggie Johnson, who finished with 12 points and 12 rebounds.

Miami shot only slightly better than Memphis (33 percent), but dominated the boards 51-31, including 23 off the offensive glass.

Memphis had a 6-point lead with 9:10 remaining, but Johnson scored six straight pints to tie it.

The teams were tied at 66 with a minute left. Will Coleman blocked Scott’s layup attempt with just under a minute left, a play that led to a foul that sent Carmouche to the line, where he hit both free throws to give Memphis took the lead for good. The Tigers hit 6 of 8 free throws in the final minute to hang on for the victory.

D.J. Stephens’ basket inside as time expired in the first half gave Memphis 38-37 lead. The Hurricanes’ zone defense kept the Tigers outside the arc throughout the half, and Memphis missed 10 of its 12 shots from 3-point range.

The Hurricanes also controlled the boards outrebounding Memphis 23-14 in the half.

Memphis built the lead to 48-39 in the early stages of the second half, as Jackson scored eight of the Tigers’ first 10 points after intermission.

Neither team could pull away in a game that had 13 ties and 15 lead changes, and the game slowed by a rash of fouls – 29 on each team.