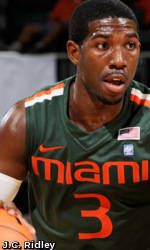 Grant scored 23 points and Scott finished with 20 as the Hurricanes, of the Atlantic Coast Conference, shook off a tough first-half challenge from the Dolphins, who play in the Atlantic Sun Conference.

Miami took the lead for good with a 12-0 run midway through the second half. Adrian Thomas’ second of two 3-pointers during the spurt capped the run with 6:47 remaining and gave the Hurricanes a 76-64 lead.

Grant converted on 7 of 12 shots, including 4 of 6 from 3-point range. Scott finished 8 of 14 from the field, while Reggie Johnson finished with 13 points and Thomas added 12.