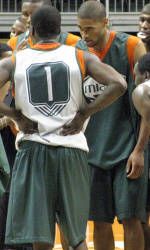 Daniels, ranked just outside the top 100 players of any position by Rivals.com, averaged 13 points and five assists per game as a junior at Raleigh’s Word of God Christian Academy. The combo guard is known for his high-flying ability and his ability shoot the ball from anywhere on the court. According to ESPN.com, Bishops is “an electrifying athlete that can turn an ordinary transition situation into a high-light reel-type play worthy of his YouTube fame.”

Daniels played AAU ball for the CP3 All-Stars and was also recruited by schools such as NC State and Purdue.

“I think Bishop is one of the premiere athletes in this class,” said seventh-year Miami head coach Frank Haith. “He has all the tools to be a terrific college player and dynamic combo guard. Bishop is someone we’re going to work with to further develop certain aspects of his game, but I believe he is an athlete that will have a great college career. “

Daniels will be the fourth North Carolina native on the Hurricanes roster in 2011-12, joining current sophomores Reggie Johnson (Winston-Salem) and Garrius Adams (Apex.), as well as junior Julian Gamble (Durham).