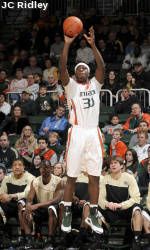 CORAL GABLES, FLA. – The NCAA has granted a five-year clock extension waiver to Adrian Thomas (Pembroke Pines, Fla./Flanagan) of the University of Miami men’s basketball team. Thomas is now officially eligible to compete with the Hurricanes for a sixth season in 2010-11.

“We’re very pleased to have Adrian officially back on the team this season,” said head coach Frank Haith. “He is very well respected among his teammates and has a great work ethic – both on the court and in his graduate studies. He will continue to be a key player for us this season.”

The 6-7, 229-pound forward suffered back-to-back season-ending injuries four games into the 2006-07 season and again four games into 2007-08. During that time away from competition, Thomas added strong perimeter shooting to his offensive arsenal and finished last season as the ACC’s leader in three-point field goal percentage, converting 42.1 percent from beyond the arc. In addition, he ranked fifth in the league with 2.1 three-pointers made per game, hitting a long-range basket in 47 of his last 52 games – including his last 11-straight contests for the longest active streak in the ACC heading into the 2010-11 season.

Thomas posted the best numbers of his career last season with 7.3 points and 2.7 rebounds per game to go along with his perimeter-shooting prowess. As a senior in 2009-10, he put together 18 games with three-plus three-pointers and posted seven double-figure scoring performances.

“It’s a relief to get this approval from the NCAA,” said Thomas, who has spent the summer on campus continuing to refine his game. “I’m excited to have another opportunity to play college basketball, and I think we will have a really special group this season that can accomplish great things.”

Thomas – selected “Ultimate Teammate” at the team’s 2010 postseason banquet in a vote by fellow team members – was the 2009 recipient of the “Bob Bradley Spirit & Courage Award,” presented by the Atlantic Coast Sports Media Association (ACSMA) to a male or female basketball player, coach or team administrator who has overcome significant injury, illness or adversity in life to become a valuable contributor to his/her program and university.

A 2005 graduate of Flanagan High School in Pembroke Pines, Thomas graduated from Miami in 2009 with a bachelor’s degree in business management and marketing, and is currently pursuing a master’s degree in sports administration.