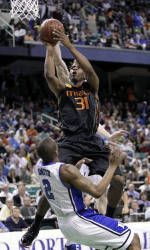 GREENSBORO, N.C. (AP) -The momentum was on the opposing sideline after a 3-pointer just before the halftime horn. Duke’s frustrated Hall of Fame coach had already been whistled for a Technical foul. And the fourth-ranked Blue Devils were flirting with joining the long list of upset victims at the Atlantic Coast Conference tournament.

It’s a good thing Kyle Singler is playing his best basketball of the season.

Singler scored 27 points to help the Blue Devils push ahead in the second half to beat Miami 77-74 in Saturday’s semifinals, sending them back to the championship game for the 11th time in 13 years.

Jon Scheyer added 16 points, including eight in the go-ahead 15-0 run early in the second half that restored some sense of order in this upset-filled week in Greensboro. The top-seeded Blue Devils (28-5) trailed by three at halftime against the league’s last-place team before rallying to reach Sunday’s final, where they will defend their title against seventh-seeded Georgia Tech.

“We have been there, but if anything that just helps us knowing how tough it is,” Scheyer said. “We’re fortunate to get through these tough games and we know whoever we play, it’s going to be a battle and we need to be ready.”

Duke, the only one of the top six seeds to reach the semifinals, has won eight of the past 11 tournaments and is chasing a league-record 18th title. But while the Blue Devils have avoided an upset loss, they were tied at halftime with ninth-seeded Virginia in Friday’s quarterfinals, then found themselves trailing 35-32 against the 12th-seeded Hurricanes (20-13).

“We really haven’t had a good first half in this tournament,” Singler said. “It is frustrating. But I think the sign of a good team is to bounce back in the second half and find a way to win.”

On this afternoon, that meant riding Singler’s second big tournament performance. After tallying 18 points and 11 rebounds against the Cavaliers, he had eight rebounds, six assists and made five 3-pointers in 31 minutes against Miami. That included Duke’s first eight points of the second half.

Freshman had 21 points for the Hurricanes, who put up plenty of fight but couldn’t follow their upsets of Wake Forest and Virginia Tech with a much bigger one. In the ACC semifinals for the first time in its history, Miami used a 17-2 run to erase a 12-point deficit and take the halftime lead on long 3-pointer with 5 seconds left.

But after Singler’s quick second-half flurry, Scheyer – who had just three points on 1-for-5 shooting to that point – knocked down a 3-pointer from the right corner to start the game-changing 15-0 run that finally gave Duke a 58-42 lead with 11:52 left. That lead held up, though pesky Miami proved difficult to put away.

“I thought in the first half, we played just about as well as we could play after we were able to absorb their pressure,” Miami coach said. “That one stretch there, the game got away from us a little bit, and that was the difference in the game.”

The Hurricanes got within five points five separate times in the last 90 seconds only to see the Blue Devils respond with either a basket or free throws. hit a desperation 3-pointer on Miami’s last possession with 2.4 seconds left, but the Hurricanes didn’t try to foul and the clock expired.

“We all came together and fought back, and we tried to bring it as close as possible,” Scott said. “But it just didn’t work out our way.”

Nolan Smith, the other member of Duke’s high-scoring “Big Three,” finished with 12 points, including a jumper with the shot clock winding down to give Duke a 70-63 lead with about a minute left.

As for Krzyzewski’s Technical foul late in the first half, he had been arguing with the officials for a few minutes before the whistle. Moments later, he ripped off his gray suit coat, tossed it on the bench and spent the rest of the game coaching without it.