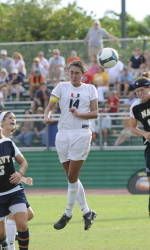 GREENSBORO, N.C. – Four members of the University of Miami women’s soccer team have been named to the 2009 All-ACC Academic Team, as announced by the Atlantic Coast Conference. Juniors Brittney Macdonald and Brittney Steinbruch were recognized for the third time and senior Beverly Goebel and sophomore Ashlee Burt were honored for the first time.

“All four players have been very consistent academically and athletically during their time at Miami,” said head coach Tricia Taliaferro. “They continue to strive excellence in everything they do and I am proud they were recognized.”

The quartet of student-athletes led Miami to its eighth consecutive NSCAA Academic Award this past season – all under coach Taliaferro. To earn the NSCAA award, the cumulative team GPA must be 3.0 or better. The 2009 fall team GPA was an impressive 3.131.

Steinbruch, a Sport Administration major with a 3.639 GPA, is currently second in school history with 28 goals, just one behind Britney Butcher. Macdonald, who has earned the reputation as one of the top defenders in the ACC, is a Biology major with a 3.822 GPA.

Burt, an undeclared major in the School of Arts and Sciences, was the only sophomore to start all 19 games for the Hurricanes during the 2009 season. She carries a 3.846 GPA.

In January, Goebel became the first player in Miami history to be selected in a professional draft, as she was picked by the Washington Freedom in the third round of the WPS draft. Goebel, who graduated in December with a Bachelor of Science in Education – Sports Administration, left the University of Miami with a 3.429 GPA.