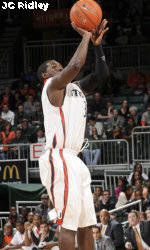 CLEMSON, S.C. (AP) -Trevor Booker scored 18 points and Clemson won back-to-back games for the first time in almost a month with a 74-66 victory over Miami on Saturday.

The Tigers (18-7, 6-5 Atlantic Coast Conference) had not won consecutive contests since taking three straight the first half of January – and had been in danger of falling out of the ACC chase.

Instead, Booker’s inside play and Clemson’s outside shooting touch were too much for the Hurricanes (17-8, 3-8).

Andre Young had four of the Tigers’ nine 3-pointers.

Malcolm Grant had 13 points to lead Miami, which has lost seven of its last nine games (six of those games being played on the road). Overall, three of the last four games for the ‘Canes have been played away from Coral Gables.

Freshman Durand Scott added 10 points to post his ninth double-digit scoring effort of the season for the Hurricanes.

Miami returns home to host Duke on Wed., Feb. 17 at 7 p.m., inside the BankUnited Center in Coral Gables, Fla. The game will be broadcast live nationally on ESPN. Wednesday’s game marks Duke’s first trip to Coral Gables since UM posted a 96-95 upset of the Blue Devils on Feb. 20, 2008.

For ticket pricing and information, please call the Hurricane Ticket Office at 1-800-GO-CANES.