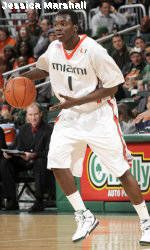 CORAL GABLES, FLA. – After playing three of its first four ACC games on the road, the University of Miami men’s basketball team packs its bags again for three of the next four contests, beginning Jan. 26 at Maryland.

The young Hurricanes play six of their first nine ACC games on the road, before the schedule turns in their favor with five of their final seven regular-season games at home in the BankUnited Center.

Miami leads the all-time series, 10-6, versus Maryland and has won four of the last five meetings between the teams, splitting the series in 2008-09 with each program winning at home.

Tuesday marks the only regular-season meeting between the teams this season. The Hurricanes look to snap a three-game skid, while the Terps have won three-straight at home and sit atop the ACC standings with Virginia.

UNTIL YOU WALK IN MY SHOES

The University of Miami men’s basketball team remains active in the community and spent last Wednesday afternoon serving meals at the Miami Rescue Mission. Before leaving, the players were asked to donate shoes to help those in need — many of the men’s basketball players in attendance responded by taking the shoes off their feet in order to help others.

On Jan. 11, the Hurricanes got the New Year off to a positive start by volunteering at the Ronald McDonald House.

Three former Hurricane greats will be paid tribute to with the institution of honored jerseys, as Jack McClinton (2006-09), Don Curnutt (1967-70) and Dick Hickox (1958-61) will have their jerseys raised to the rafters of the BankUnited Center during halftime of the home game versus Duke on Wed., Feb. 17.

The Hurricane Gameday with Frank Haith airs on CSS Wednesdays at 5 p.m. The show includes Coach Haith breaking down Miami and ACC basketball, player features and a guest appearance from a Hurricane staff member or administrator each week.

As part of a campus-wide effort to aid the people of Haiti, the University of Miami Department of Athletics collected monetary donations at last Tuesday’s game versus Boston College. The UM community has raised more than $3.76 million to support the University’s relief efforts in Haiti. Funds have been collected for the UM/United Way “Operation Helping Hands” which supports the UM Global Institute and the work of its doctors, nurses and students who are working directly with the victims of the earthquake.

Through 19 games this season, seven different Hurricanes have led the team in scoring, including a career-high 15 points from redshirt freshman Reggie Johnson versus Boston College… Adrian Thomas has hit a three-pointer in 13-straight games — the longest active streak in the ACC… Dwayne Collins needs just five rebounds to knock former teammate Anthony King out of seventh place in the UM record book in career rebounds… Collins is posting 1.6 blocks per game versus conference competition — eighth best in the ACC…  With 20 blocks so far this season, the senior forward has already registered more than he did in full seasons as a freshman and sophomore… Malcolm Grant’s 4.0:1 assist to turnover ratio versus ACC competition is tied for the best in the league, while his 4.8 assists average in ACC games is sixth.