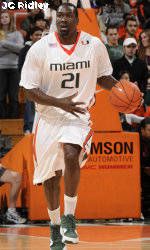 CORAL GABLES, Fla. (AP) – Reserve Reggie Jackson scored 15 of his 17 points in the second half, and Boston College overcame a 17-point deficit with less than 16 minutes left to beat Miami 79-75 Tuesday night.

The Eagles trailed 58-41 before a 22-7 run got them back in the game. Jackson fed Joe Trapani for a layup as the shot-clock buzzer sounded to put the Eagles ahead for the first time in the second half, 70-69 with 2:50 left.

They led the rest of the way. Trapani, a junior, scored a career-high 31 points.

Dwayne Collins led Miami’s effort with his 20th career double-double of 15 points and 11 rebounds. In his second-straight start, redshirt-freshman Reggie Johnson finished just one board shy of posting a double-double of his own with a season-high 15 points and nine rebounds. Malcolm Grant (11) and James Dews (10) also added double-figure scoring, while Grant dished out a game-high five assists.