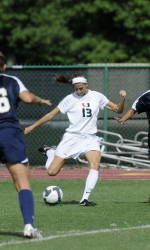 CORAL GABLES – The University of Miami women’s soccer team will be facing the Canadian National Team on Tuesday, Nov. 10 in an exhibition match at the Holiday Inn Sunrise in Sunrise, Fla. Kick-off is set for 4 p.m.

Team Canada has come to South Florida to train for the 2010 World Cup Qualificatoin Tournament and will face the Hurricanes as part of its training regimen.

Miami ended its season a week ago, finishing the year with an 8-10-1 record. For the third consecutive season Brittney Steinbruch led the team in scoring and now sits just one goal shy of tying Britney Butcher for the most in a career with 29.

The season also saw sophomore goalkeeper Vikki Alonzo record six shutouts, tied with Lauren McAdam for the second-most in school history. That added with the 11 that Alonzo had in 2008 give her a school record 17 for her career.

In the season-opening game against No. 8 Florida, the Hurricanes welcomed a record smashing crowd of 2,277 to Cobb Stadium. The average home attendance was 625, nearly 300 more than in 2008.

On Oct. 25, Miami defeated the No. 2 North Carolina for the second straight time in Coral Gables by a 1-0 score. In 2007, the Hurricanes also upended the Tar Heels – then ranked seventh in the nation by the same 1-0 score. Miami has only met North Carolina seven times, but already has beaten the nation’s most dominant program twice – joining Florida State and Duke as the only Atlantic Coast Conference teams to defeat UNC more than once.