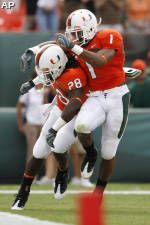 MIAMI (AP) — A defense that couldn’t stop anything a week ago was suddenly airtight. An oft-injured running back had the best game of his career. And a punt returner somehow evaded seven would-be tacklers on his way to a touchdown.

For No. 16 Miami, everything worked.

Graig Cooper rushed for a career-best 152 yards and a touchdown, Thearon Collier cut across the field for a remarkable 60-yard punt return touchdown and Miami eased past struggling Virginia 52-17 Saturday–finally avenging a loss that hovered over the Hurricanes for two years.

“I’m not going to lie to you: It feels good to hang 52 on them,” said center A.J. Trump, who was a backup on Virginia’s last trip to South Florida, a 48-0 Cavaliers victory two years ago in Miami’s final game at the Orange Bowl.

“We remember what they did to us at the Orange Bowl last time,” Cooper said. “It was important to get this. It was personal.”

Rashawn Jackson had a 34-yard rushing touchdown for Virginia (3-6, 2-3), which has lost 10 of 13 starting with an overtime defeat to Miami last season, a slide that’s placed coach Al Groh’s future at his alma mater in doubt.

The Cavaliers were outgained 515-149 and played without starting quarterback Jameel Sewell, who warmed up but was eventually ruled out with a shoulder injury.

“Miami’s got a lot of playmakers in all phases of the game,” Groh said. “And we had a lot of difficulty controlling and matching those playmakers.”

It was a frustrating day all around for Virginia, best summed up by a scuffle late in the third quarter.

Virginia’s Cam Johnson ripped Harris’ helmet off while going for a sack, and both players were flagged for unsportsmanlike conduct. After video review, Johnson was also hit with a face-mask penalty, which helped set up Miami’s fifth touchdown and put the game out of reach.

“If they called it, I guess it was there,” Johnson said.

Groh got an explanation from the officials and chose postgame words carefully, mindful of the $30,000 fine Florida’s Urban Meyer got in recent days for criticizing Southeastern Conference officials.

“Urban makes a lot more money than I do,” Groh said.

Cooper, who also had a career-long 70-yard carry, now has 2,001 yards in his Miami tenure.

Virginia blocked two punts early–the Cavaliers hadn’t done that since 1996 — to keep things close for a bit. Marc Verica was harassed all day, finishing 11 of 29 passing for 75 yards with an interception, and Miami scored the game’s final 28 points.

Miami’s defense, which allowed 555 yards last week against Wake Forest, barely even resembled that unit. The 149 yards allowed were the third-fewest yielded by the Hurricanes in 46 ACC games.

“We were on the same page all week and it showed,” linebacker Colin McCarthy said.

Damien Berry ran for touchdowns of 1 and 2 yards in the third quarter. Cooper added a 3-yard run in the fourth, and backup quarterback A.J. Highsmith completed his first career scoring pass, a 15-yarder to Kendal Thompkins with 3:34 left.

After halftime, it was one-sided: Miami outgained Virginia 282-57 in the final 30 minutes.

It was an odd opening two quarters, where Miami dominated in yards (233-92) yet only led 24-17. Harris completed 13 passes to 11 receivers. Virginia benched its starting punter. And a 3-3 game late in the first quarter took off quickly– 28 points scored in a span of 5:04.

And Collier made the play of the day.

He took Nathan Rathjen’s low punt near the Virginia sideline, and two defenders dove for him. They missed, and the race was on.

Collier retreated 13 yards and evaded Perry Jones while making a wide arc toward the Hurricanes’ sideline. Two blocks, the last from Chavez Grant, finally sprung him free, and 16 seconds after catching the ball Collier hit the end zone for a 17-10 lead.