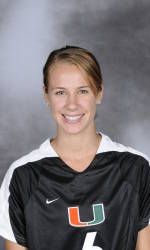 CORAL GABLES – The University of Miami women’s soccer team will continue its 2009 Atlantic Coast Conference schedule against the No. 17 Virginia Tech Hokies, Friday at 7 p.m. at Thompson Field.

The Hurricanes are coming off their biggest win in school history after defeating the second-ranked University of North Carolina on Sunday at Cobb Stadium, 1-0. Senior captain Beverly Goebel scored in the 81st minute off a pass from Jessica Wyble from 25 yards out.

The No. 2 Tar Heels were the highest ranked team that Miami has ever beaten and the UNC loss was the first time since 2000 that it had lost two straight contests.

With the game-winning goal on Sunday, Goebel is tied with the team lead with both Brittney Steinbruch and Kate Howarth with three. Steinbruch currently leads the `Canes with nine points as she also has three assists.

Miami’s goalkeeper Vikki Alonzo recorded her sixth shutout of the season and the sophomore currently has 17 in her short career – the most in school history.

A Look at the HokiesLast week, Virginia Tech went 1-1, with a 4-3 win over No. 5 Wake Forest and a 4-1 loss at Duke. Wake Forest was the second top-five team that the Hokies have defeated on the season as they topped then No.1 North Carolina on Oct. 4.

Virginia Tech is led offensively by Kelly Conheeney, who has 17 points. Conheeney along with Jennifer Harvey and Marika Gray are all tied with a team-leading seven goals on the season.

Four different players have logged minutes in goal for the Hokies with Kristen Carden the leader with 882 minutes. As a team they have recorded a 1.45 goals against average.

The SeriesFriday’s meeting will be the 10th between the two programs – dating back to 2001 season. The Hokies hold a 4-2-3 all-time lead in the series. The last two meetings have been 1-1 ties in 2007 and 2008. Last season, Paulellete Ricks-Chambers scored the game tying goal in the 89th minute to send the contest into overtime.