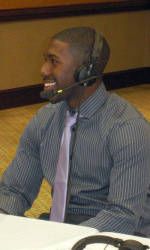 Head coaches and select players from throughout the Atlantic Coast Conference met with members of print, television and radio media to kick off the 2009-10 basketball season.

Media in attendance predicted the member teams’ order of finish and selected a preseason all-conference team and player and rookie of the year. For the first time in the 41-year history of the preseason voting, the predicted order of finish resulted in a tie between Duke and North Carolina for first place, followed by Clemson (3), Georgia Tech (4), Maryland (5), Wake Forest (6), Florida State (7), Virginia Tech (8), Boston College (9), Miami (10), Virginia (11) and NC State (12).

Miami was picked to finish 12th in 2007-08, when the Hurricanes put together one of the winningest seasons in school history and advanced to the second round of the NCAA Tournament.