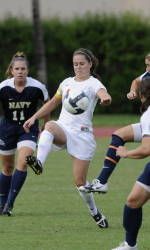 The Hurricanes ended a two-match losing streak in their last contest, Thursday evening with a 1-1 tie against NC State.

In the game, junior Lauren Singer scored her first goal of the season, after a nice play down the sideline by Paulelett Ricks-Chambers to get Singer the one-time goal. Miami narrowly missed an overtime victory after a Singer shot was inches too high.

Brittney Steinbruch leads Miami with nine points on the season and is tied with freshman Kate Howarth for the team lead in goals (3) and is only two goals shy of tying Britney Butcher’s school record of 29.

A Look at the Tar HeelsThe defending National Champions enter Sunday’s game with a No. 2 ranking, but suffered its second loss of the season on Thursday in double-overtime to Florida State, 3-2. FSU’s game-winner came off a corner kick with just 12 seconds remaining in the contest.

The Tar Heels are led offensively by Jessica McDonald, who has seven goals this season. However, UNC features nine players that have scored multiple goals on the year.

Four players have seen time in net for North Carolina, but Ashlyn Harris is the starter and she has recorded five shutouts for the season and sports a 0.36 goals against average.

The SeriesSunday’s meeting will be the seventh between the two programs – dating back to 2004 season. The Tar Heels hold a 5-1 all-time lead in the series. Last year, the teams met twice in consecutive games – in the final game of the regular season and in the opening game of the ACC Tournament – with UNC winning by a 1-0 score in both. The last time North Carolina visited Coral Gables, the Hurricanes defeated the then No. 7 Tar Heels on a Steinbruch goal in 2007.