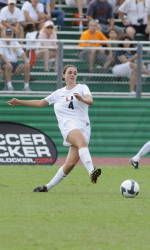 Miami Takes On No. 6 Wake Forest

CORAL GABLES –  The University of Miami women’s soccer team will continue its Atlantic Coast Conference schedule as it  plays the second of a two-game road swing at the sixth-ranked Wake Forest Demon Deacons at Spry Stadium, Sunday at 1 p.m.

Miami is coming off a tough 4-0 loss to the Duke Blue Devils in Durham, N.C. on Thursday night.  Four different Duke players scored in the contest as the ‘Canes are looking to even the ACC record at Wake Forest.

Brittney Steinbruch leads Miami with nine points on the season and is tied with freshman Kate Howarth for the team lead in goals and is only two goals shy of tying Britney Butcher’s school record of 29.

A Look at the Demon Deacons
Jill Hutchinson lead Wake Forest with 10 goals and three assists on the season, with four game-winners. Kaley Fountian has eight goals for Wake Forest and four other student-athletes have multiple goals on the year.

Time has been split in goal for the home squad as Amanda Barasha and Laura Morse have nine and 10 starts respectively.  Barasha has four shutouts on the season with Morse recording three.

The Series
Sunday’s meeting will be the sixth between the two programs – dating back to 2004 season. The Demon Deacons hold a 4–1 all-time lead in the series. However, last season at Cobb Stadium, Brittney Macdonald scored the game’s only goal in a win on senior day over Wake Forest.