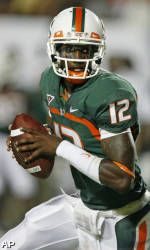 That didn’t work either.

The referee threw a flag and sent two Rattlers to the sideline, and four plays later the Hurricanes scored another touchdown en route to a 48-16 victory Saturday night.

Jacory Harris led No. 11 Miami to 31 points playing only the first half, and the Hurricanes (4-1) made the most of the mismatch facing an unranked team for the first time this season. Florida A&M (4-1) lost to Miami for the seventh time in a row.

Fourth-string Hurricanes halfback Damien Berry, a former safety, carried for the first time in his career and gained 162 yards in 14 attempts, including a 35-yard touchdown.

Two long kick returns helped Miami take a 17-3 lead after 14 minutes, and Thearon Collier scored on a 61-yard punt runback in the second half.

Harris went 16 for 24 for 217 yards, including touchdown passes of 5 and 7 yards. In the first half the Hurricanes totaled 303 yards and built a 31-3 lead, moving the ball so effectively an official had to stop the clock when the sideline chains broke.

Harris was intercepted twice, once in the end zone, but Miami didn’t punt until he was replaced by A.J. Highsmith. The true freshman made his college debut to start the second half and went 3 for 3 for 38 yards while directing two scoring drives.

Six Hurricanes scored a touchdown apiece, and 12 caught at least one pass.

Florida A&M’s Curtis Pulley threw for 144 yards, ran for 81 and scored on a 26-yard run. Pulley completed a 27-yard pass to Adrian Smith on the first play from scrimmage, and the Rattlers moved 59 yards before settling for a field goal.

That was their lone lead. Mike James returned the ensuing kickoff 41 yards, and Miami went on to score on a 5-yard pass from Harris to Leonard Hankerson.

Travis Benjamin’s 33-yard punt return set up another scoring chance in the first quarter, and Harris took advantage with a 7-yard touchdown pass to Jimmy Graham for a 17-3 lead.

Harris hit Hankerson for 37 yards, and on the next play James scored on a 5-yard run. A 2-yard scoring run by Lee Chambers capped a 78-yard drive.

Even though the Hurricanes substituted early and often, their list of injured regulars grew. Receiver Aldarius Johnson was hurt on first drive and later had his right arm in a sling. Defensive end Eric Moncur hobbled out of the game in the third quarter.

Running back Graig Cooper did not play because of an injury to his lower extremity.