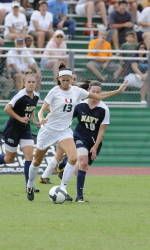 The Hurricanes controlled the pace of play much of the game, with senior captain Beverly Goebel and freshman Jordan Roseboro dominating play in the midfield.

Just 23 seconds after entering the game, sophomore Brittany Bucknor picked up her first assist of the season after feeding Brittney Steinbruch in the 16th minute. Steinbruch was able to fire a shot between two defenders into the left side of the net from 15 yards out.

The goal was the third of the season for Steinbruch, tying her with freshman Kate Howarth for the team lead. It was also the 27th of the Wyckoff, N.J. native’s career, leaving her only two goals behind Britney Butcher’s school record of 29.

The Hurricanes came out of the break looking to add to their lead and that’s exactly what they did. Only one minute and 19 seconds in the second half, Steinbruch lobbed a pass over the back line of the defense to a streaking Beverly Goebel. The senior captain found herself in a one-on-one situation and popped the ball over the head of the charging keeper for her second goal of the season.

“Beverly is the hardest worker on our team,” said Steinbruch. “It’s great to see her get rewarded with a goal. We as a team know that she is what makes everything go…it was really nice to see”

Once again sophomore Vikki Alonzo was stellar in goal, making four saves on the night, none more impressive than her sliding kick save on a one-on-one in the 22nd minute. Clemson’s Maddy Elder stole the ball in the Miami zone, but Alonzo aggressively charged, nullifying the scoring opportunity. The shutout is the fifth on the season for the Carrollton, Texas native.

“Clemson created some really dangerous opportunities, but Vikki came up big to get her shutout,” said head coach Tricia Taliaferro. “I also think it’s big that we are getting Jordan off of injury, it’s creating different opportunities for us and letting more people give positive contributions.”

Miami returns to the pitch on Thursday, Oct. 15, when it travels to Durham, N.C. to take on the Duke Blue Devils.

October is Breast Cancer Awareness month and the Hurricanes soccer team raised awareness by holding a `Pink’ game to raise money to support the cause. Miami wore special pink Nike jerseys during the match. In addition, the price of admission was waived for the game, but fans were encouraged to make a donation at the gate. All funds raised went to the benefit of the Sylvester Cancer Center. Pink Hurricane t-shirts were also available for purchase.

“I think it’s extremely important to raise awareness, but it was with a purpose for us. There are players on this team that have been affected by breast cancer in some way,” said Taliaferro. “As women we have that responsibility to support each other in any way that we can and I think it was fantastic that the fans came out and contributed the way they did.”

Fans can continue to help raise funds by visiting hurricanesports.com to bid on the pink jerseys that will were worn during the game. The auction runs until 7 p.m. on Monday, Oct. 12.